In 1969 Montreal businessman Irving Liverman ventured into the sport of standardbred racing with a modest investment of $6,500. During the next three decades he became one of the most prominent owner/ breeders in North America. This accolade is earned when you examine Liverman’s stable resume – Silent Majority, Handle With Care, Muscles Yankee, Windshield Wiper, Laughs, Britelite Lobell, Feel The Motion, Time Well Spent, Chasing Tail and Kadabra. The trophy case at his residence in Hampstead, Que., overflowed with the spoils of a steady parade of the exquisite performers that have won almost every coveted stakes event – The Hambletonian, Meadowlands Pace, Breeders Crown, Messenger, the Kentucky Futurity, World Trotting Derby and Jugette. 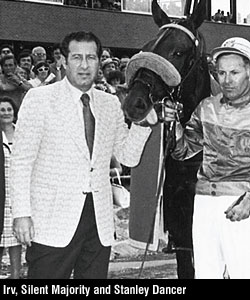 Silent Majority was the phenomenal pacer that brought Liverman his first genuine taste of success. In 1970 future Hall of Fame trainer Roger White phoned him from the Tattersalls Sales in Lexington, Ky., asking him if he wanted to become a partner in a “plain looking colt” for $9,500. He agreed. The son of Henry T. Adios would trigger one of the great sagas of Canadian harness racing history, especially with his battles with another exceptional pacer – Strike Out. Horse of the Year honors for Canada went to Silent Majority, who at stud would sire one of the greatest sires in history – Abercrombie. In 1972 Liverman listened to the advice of Hall of Fame trainer Billy Haughton and paid $12,000 for a filly by Meadow Skipper. Her name was Handle With Care, who would win her first 24 races (she was 17-for-17 as a juvenile) and when she retired was the fastest and richest pacing mare in harness racing history. When questioned about his incredible success at yearling sales, Liverman said, “I never found any yearlings. I left that up to my trainers. I told Billy that the minute he started selling electric fans (Liverman manufactured light bulbs and electric products), I’d start picking out my own horses. And Billy never ever did sell any fans.”

In the twilight of his career, Liverman looked back with great affection at Handle With Care’s career during a conversation with Hoof Beats’ columnist Dean Hoffman. Hoffman said, “Liverman loved seeing her long legs gobbling up ground … She wasn’t the prettiest thing ever to look through a bridle, but he came to love the filly with the long face.” Liverman added, “She had the ugliest face on earth. But I’d sure like to buy some more ugly ones like her.” In later years Liverman and his son Herb nurtured a band of blue-blood trotting broodmares that ranked among the best in the breeding industry. In 1997 he attained another milestone when he sold a yearling at public auction for US$320,000. During World War II he served as a pilot with the RCAF. He once served as secretary of the Hockey Hall of Fame selection committee. Liverman also was on the board of directors of Blue Bonnets Raceway and until 2000 was shareholder in The Red Mile in Kentucky. 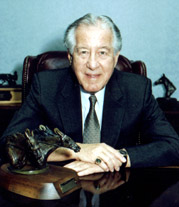