One of the most respected and successful trainers of thoroughbreds in Canada during the first 30 years of the 20th century was John Nixon. Among his remarkable list of achievements were five King’s Plate winners – Shimonese and Parmer in 1909 and 1910, Heresy in 1912, Tartarean in 1915 and Troutlet in 1927. His well-conditioned horses won every major event in Ontario.

Born in Waterloo, Ont., in 1853, Nixon was a carpenter until age 30 before opening a livery business in Toronto in the 1880s. Initially he owned harness horses before devoting his time to the jumpers. His success for the famed Wellington Stable with Lion Heart, considered the greatest jumper in North America of his era, and Japonica, enabled him to take over the prestigious racing stables of Valley Farm, Brookdale, Thorncliffe, Charles Millar, R.J. McKenzie and Ryland H. New. 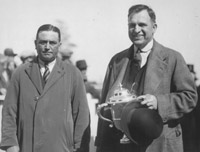 When he died in 1929 at age 76, tributes flowed in from racing officials, praising the “dean of Canadian turf”. One of his pallbearers was New, whose filly Troutlet provided Nixon with his final Plate win in 1927. A lifelong resident of Oakville, Ont., New also won the King’s Plate in 1930 with Aymond. New, a former vice-president and long-time director of the CTHS, witnessed Aymond’s victory from a $2 seat in the top row of the grandstand. He ignored the social rituals that surround the Plate, refusing to wear a top hat like fellow owners and OJC officials, wearing instead a “Christy” bowler. “I was a rebel in those days, but a constructive rebel. I was always advocating changes. I remember the years when there wasn’t even outhouse facilities at the track for the men.”