It was speculated that Fred Schelke “might require the talents of Houdini” to get South Shore as far as the post parade for the 1922 running of the King’s Plate. Hampered by an ailing leg throughout her career, the 4-year-old filly had raced only once for owner and breeder Thorncliffe Stable but Schelke boasted before the race that “if she’s sound I’d be willing to wager the City Hall on her.” He attended to her until Friday midnight, applying ice to the bad leg before her Saturday afternoon “Gallop For The Guineas.”

The gimpy leg was dismissed by the bettors as she coasted home an easy winner, paying $6.75. In 1929 Schelke and Thorncliffe were back in the winner’s circle with Shorelint, a son of South Shore. He too provided Schelke with problems as he pulled up lame days before the Plate after stepping on a stone and suffered a quarter crack in the wall of his hoof. Again Schelke was credited with a marvelous job of getting his horse ready for the Plate.

However, Schelke was best known in racing circles for a horse he bred and trained and was among the first thoroughbred inductees into the Hall of Fame in 1976 – Shepperton, who won the Canadian International in 1942 and ‘43, the Breeders’ Stakes and numerous handicap races. In 1952 track historian W.A. Hewitt wrote, “For a horse that suffered severe physical disabilities during his entire racing career, Shepperton, ‘the Big Train’, stands out among the top five Canadian-bred horses of all time.” He described Schelke as a “master horseman of the old school.”

Schelke, who was born in Indiana, had a farm in Gormley, Ont. He trained at Woodbine from 1912 to 1948. His list of owners is a “who’s who” of racing. He trained stakes winners Boniface and Baby Grand for Commander J.K.L. Ross in 1920 before moving to Thorncliffe Stable. Other elite owners included R.W.R. Cowie, Harry Hatch, H.G. Bedwell, J.C. Fletcher, Brookdale Stable and Mrs. R.E. Webster. Schelke died in 1949 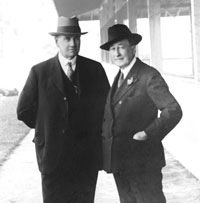