The man with the highest profile in the thoroughbred industry in North America in the last 25 years was unquestionably the Canadian automotive industry magnate and maverick– Frank Stronach. By 2006 his horses had won four Breeders’ Cup championships – Awesome Again, Macho Uno, Perfect Sting and Ghostzapper. He had also won the Queen’s Plate twice – with Basqueian and Awesome Again, who created an historic first in 2004 when two of his sons, Ghostzapper (Classic) and Wilko (Juvenile), won Breeders’ Cup titles at Lone Star. It was the first time a previous winner of a Breeders’ Cup had sired two winners on the same card. Some of Stronach’s other champions include Touch Gold, who upset Silver Charm in the Belmont Stakes, Red Bullet, who sprung a greater upset, defeating Fusaichi Pegasus in the Preakness Stakes, and 2004 Horse of the Year Ghostzapper. His first really good horse, Glorious Song, which he later owned in partnership with Nelson Bunker Hunt, was the first Canadian bred to win $1 million. In 1980 she became the first of his numerous award winners. 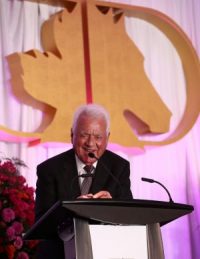 Stronach’s trophy room is filled to the ceiling with Sovereign and Eclipse Awards, which go to the leading horses, owners and breeders in Canada and North America. His horses earned many millions when he was voted the leading breeder and owner in the U.S. for three successive years – 1998 to 2000. In 2005 Adena Springs led all breeders in North America for the third consecutive year with earnings of $11.6 million. He had also been honored with nine Sovereigns as champion owner and in 2006 Adena Springs gave him his fourth Sovereign as leading breeder. He owns three Adena Springs Farms: in Aurora, Ont., Kentucky and Florida. For several years Adena has held its own broodmare sale in in Lexington and a 2-year-old sale in Ocala, Fla. Stronach has bred more than 200 stakes winners. In 2006 the Adena Springs’ operations stood 17 stallions and owned more than 500 broodmares.

Born in 1932 in Austria, the selfmade millionaire grew up in a farm environment before immigrating to Canada in 1954. His first job was washing dishes at a hospital in Kitchener-Waterloo. He then went to work in the tool and die business, the primitive foundation of the Magna automotive parts manufacturing and electronic technology business which he proceeded to guide and build into one of the world’s great success stories. In 1962 he purchased his first horse, a riding horse. Two years later Miss Scooter was the first horse to run in Stronach’s powder blue and black diamond silks. His first winner was Gay Bride in 1965. That year his stable earned $8,280. In 2000 horses running under the new red, black and white silks of Adena Spring earned $11 million. His Magna Entertainment Corporation is the largest operator of thoroughbred racetracks in North America. In 2002 MEC gained control of one of North America’s most famous races, the Preakness, when it bought control of two Maryland racetracks, Pimlico and Laurel Park. In 2006 MEC also owned Santa Anita, Gulfstream, Golden Gate Fields, Portland Meadows, Thistledown, Remington Park, Great Lakes Downs and Lone Star. 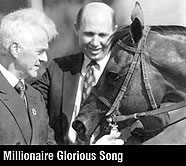