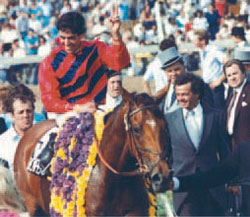 In the 1980s one of the most consistent and dedicated jockeys on the Ontario Jockey Club circuit was Larry Attard. During that period he won the Queen’s Plate on Bompago, won the Sovereign Award twice as the country’s leading jockey -1983 and 1986 -and was the leading rider in Ontario in 1986, 1987 and 1989. Only injuries suffered in riding accidents prevented him from reaching 3,000 wins during his twenty five-year career. He retired following the 1997 season with 2,366 wins and purse earnings of more than $34 million. On retirement Attard was urged by jockeys to become an agent, but he chose to join the other Attard trainers at Woodbine, training and racing a small stable with the assistance of his wife Veronica and children Elena and Jason.

Born in Malta on December 31, 1951, Attard began his riding career in 1973. While most of the Attard brothers Joe, Sid and Tino -took up training when they immigrated to Canada, Larry, being the smallest, tried race-riding. As an apprentice he looked up to the late Avelino Gomez and Sandy Hawley. In learning the lessons taught by those experienced jockeys, Attard carved out several solid seasons in the 1970s. His success was, perhaps, only overshadowed by the numerous injuries he suffered in the decade, including a serious spinal injury.

The bad luck continued into the 1980s, but Attard was still able to make his mark on the scene. It was not until 1983 that Larry had an injury-free year and he demonstrated his talent, winning the Queen’s Plate and a Sovereign Award. A broken collarbone suffered in a April, 1997, spill knocked him out of action for six weeks. Another spill in August, when his mount went down and he suffered a concussion (his eighth) and a broken rib, led to his decision to announce his retirement in the spring of 1998.

Attard rode many Sovereign Award champions over the years including Kiridashi, Let’s Go Blue, Apelia, Benburb and Fozzie Bear. In 1993 Attard was honored as the recipient of the Avelino Gomez Memorial Award, which goes to a jockey who has made a significant contribution to the sport. In 2001 Attard was inducted into the Mississauga Sports Hall of Fame. 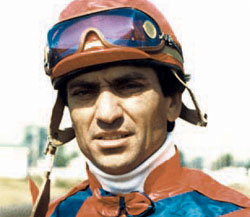