When he died in Truro, N.S., in 1930, the November 27 issue of the Trotter and Pacer magazine said, “No horse has ever come to the Provinces (the Maritimes) that has demonstrated himself such a sire of speed as Captain Aubrey 2:07 ¼. He got a number of fast ones before coming here, and since his arrival the record books each year have told of his success as a sire, so much so that the comment has often been made that were he at the head of a stud at some of the great farms in the United States, he would have been among the leaders in the list of great sires.”

A bay horse foaled in 1904, Captain Aubrey had a solid four-year racing career, during which he posted 45 wins in 81 heats before injury forced his retirement to stud. He was sired by Peter the Great, the world’s greatest extreme speed sire of that era, and was out of May Fern, by Red Fern. Reports differ if the breeder was J. Malcolm Forbes of Milton, Mass., or J.M. Johnson of Calais, Maine. He was later purchased by John Donovan of St. Joseph, Mo., for his King Hill Stock Farm. In 1913 he was imported for the sole purpose of improving the breed of standardbred trotters on Prince Edward Island. The nine-year-old stallion was purchased by the Hon. J.W. Richards of Bideford, PEI, a member of the House of Assembly from 1873 to 1908 and a Member of Parliament from 1908 to 1911.

After Richards’ death Captain Aubrey was purchased by the Nova Scotia Agricultural College, which stood standardbred stallions to improve the breed of trotters used for transportation or racing. From 1917 to 1929, Captain Aubrey spent time in the breeding sheds at Bible Hill, New Glasgow, Sydney and Amherst and bred more than 600 mares.
His biggest book was in 1921 when he serviced 188 mares.

His most famous offspring and also a member of the Canadian Horse Racing Hall of Fame was Bill Sharon, 2:04 ¼, who sold for $25,000, then the highest priced standardbred ever sold in Canada. At one time his mark was the fastest record trotting or pacing by a horse bred in the Maritime Provinces. During his seven-year career, which included Grand Circuit competition, Bill Sharon finished among the first three in 80 percent of his 203 heats.

More than 100 of Captain Aubrey’s sons and daughters took records while racing successfully in the Maritime Provinces, New England and some on the Grand Circuit in the U.S. His offspring were noted for their intelligence, speed and stamina. 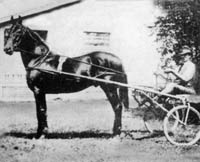