In the 1800’s and for most of the first half of the 20th century the focal point for harness racing in Canada was in the Maritime Provinces. Crowds as huge as 25,000 were attracted to New Brunswick tracks at Saint John, St. Stephen, Woodstock and Fredericton when local favorites competed against some of the greatest American pacers during the heyday of the Maine-New Brunswick Circuit.

John R Braden, a bay by John R Gentry, was foaled in 1912 in Tennessee and was the greatest of the many outstanding pacers that were purchased by community groups to represent their cities, towns or villages on the competitive circuit. Although American bred and owned, his exploits on the track endeared him to fans at all Canadian stops on the circuit. He was purchased for about $5,000 by the Mooseleuk Club of Presque Isle, Maine, in 1920. A crowd estimated at 25,000 watched John R Braden defeat world champion Margaret Dillon and Directum J in three consecutive heats (fastest in 2:07 1/2) at Island Park Raceway in Woodstock. 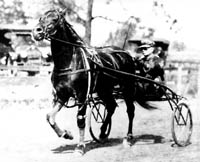