No other owner in the history of Canadian horse racing can lay claim to the feats accomplished by Robert Davies of Todmorden Mills, Ont. He’s the only man to ride in the Queen’s Plate as well as own, train and breed winners of the Plate. Davies, who was one of Toronto’s wealthiest citizens, also owned standardbreds and was vice-president of the Ontario Jockey Club from 1895 until his sudden resignation in 1904. Regarded as one of the club’s most knowledgeable directors, it was believed he resigned because of the boards failure to act on his suggestion of relaxing the rules of eligibility for the King’s Plate, thus allowing horses to race who had been foaled outside of Ontario.

During his career he founded the Dominion Brewing Co., was president of the Canadian Horse Breeder’s Association. His true love, however, was horses and his Thorncliffe Stables and stock farm. Davies’ familiar canary and black colored silks were regular visitors in the winners’ circles in Canada and the U.S. His horses won the Coronation Futurity four times.

At age 16 he rode in the 1865 Queens’ Plate in London. He owned and trained Floss, winner of the Plate at Kingston in 1871 and bred 1872 winner Fearnaught. Davies died in 1916 but a mare he bought in Kentucky, Southern Maid, produced 1922 Plate winner South Shore for his sons, Robert, George, Wilfred and Melville. Thorncliffe Stable also won the 1929 Plate with Shorelint. The stable’s final hurrah came in 1935 when Sally Fuller, bred by Thorncliffe, won in the silks of Edward Frowde Seagram. 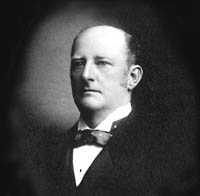