There was a time in the 1980s and early nineties that the name of William (Bud) Fritz was synonymous with harness racing in Ontario. The Fritz stable came as close to dominating the province’s sires stakes program as any single operation ever has. In 1949 the Walkerton, Ont., horseman began his driving career at Elmira Raceway. Since that time he has captured driving titles at Hanover, Orangeville, Western Fair, Elmira and Owen Sound Raceways. His career statistics as a driver show that he won almost 1,900 races to go along with purse winnings of over $10 million.

Fritz has enjoyed some tremendous years as a trainer and driver, but none could compare with 1990 when Fritz trained a great pacer and a sensational trotter. Fritz trained and drove the three-year-old pacing colt Apaches Fame to numerous victories that year. But without question one of the most memorable achievements for Fritz came when he guided the hometown favorite to a stunning victory in the $1 million North America Cup, Canada’s richest harness race, before a near capacity crowd at Toronto’s Greenwood Raceway.

Apaches Fame, who would later be inducted into Canada’s Horse Racing Hall of Fame, would go on to win many more major events including the Burlington Stakes, the Confederation Cup and the Provincial Cup. The colt finished his season with $1.1 million in earnings. That same year Fritz trained and drove A Worthy Lad to a victory in The Canadian Trotting Classic, one of 30 straight wins that the son of Worthy Bowl would enjoy before being exported to Sweden. These two star performers earned national honors for their respective divisions and gave Fritz his third O’Brien title as Canada’s Horseman of the Year in1990 to go along with that honor in 1986 and 1989. Fritz also received an O’Brien in 1990 as Canada’s Trainer of the Year.

Other noteworthy performers that have emerged from the Fritz stable and contributed to his 1,068 victories and over $8 million in purse earnings include Silver Reign, Annie Ivy, Misty Silver, Tommys Becky, Queens Arms, Silver Wraith and Halos Girl. 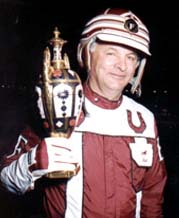