Charles Boyle’s career as an owner, breeder and trainer of champion horses both in the U.S. and Canada was a long, colourful and distinguished tableau. When he died at age 81 in 1919 at “The Firs,” his long-time home in Woodstock, an obituary stated: “To write the full story of Boyle’s racing activities would be to cover the period of the transition of the sport of the turf from local horses, with no established authority and no permanence of organization, to the complete and systemized racing of present day. He clearly was a pioneer…a master of his profession.”

Boyle, a large, robust man who was born in Hamilton, won the third running of The Queen’s Plate with Palermo, an aged gelding by Royal George, a trotting sire. His jockey was Charles Littlefield, who’d won the first running of The Plate and later became a business partner of Boyle’s when they operated a stable for many of the leading owners in New Jersey and New York in the late 1870s and ’80s. Boyle owned and trained Roddy Pringle, winner of the 1883 Plate at Woodbine, the first year the race was under the authority of the fledgling OJC. Later he won The Plate in 1897 and ’98 with Ferdinand and Bonino for the powerful Seagram Stable of Waterloo.

Boyle’s contribution to Canadian breeding was significant in his importation of Havoc, who sired four Plate winners, and princeton, sire of Three More. His son, Klondike Joe Boyle, gained far more notoriety. A much-decorated World War I hero, he was the lover of Queen Marie of Romania and a spy who aided Russia against Germany. 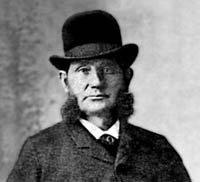