The man who helped keep horse racing alive in Manitoba in the 1950s and 1960s was Jack Hardy. He was instrumental in the building of Assiniboia Downs in Winnipeg in 1958. In September, 1991, the death of the Assiniboia Downs’ founder caused everyone associated with Manitoba racing to pause and reflect on the tremendous facility at the Downs because of Hardy’s vision. Winnipeg had a long tradition of racing; but in 1957 when the Polo Park track was sold to become a shopping mall, many felt that thoroughbred racing would cease in the province. Hardy felt differently. Within 10 months of the closing of Polo Park, Assiniboia Downs, termed by experts as “Canada’s newest and finest track, ” held its grand opening on June 8, 1958.

Owner and breeder and future president of the track, Jim Wright, said at the time, “You have to admire his courage. When he built the racetrack there was nothing out there … not even a perimeter highway like there is now. All that was here was a gravel road.” Once opened Jack Hardy ran things with a special style. He worked to make the Manitoba Derby a premier racing event, reintroducing the race in 1960 and won the race with his horse, Bocage. He invested in the track because he felt that racing was important to Winnipeg, but also because he felt that the racing community was important. He said that the racing community draws people from all over and that when his place was rolling it was one of the largest communities in Manitoba. 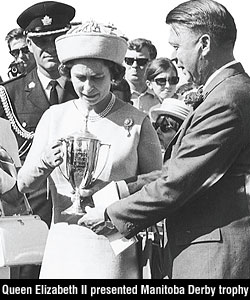 Before he sold the track in 1974 the Manitoba Derby had become the province’s first $100,000 race. In 1970, Manitoba’s Centennial, Assiniboia Downs, at Hardy’s invitation, was host to the Royal Family. Her Majesty Queen Elizabeth II presented the Derby prize to Jean-Louis Lévesque, owner of Fanfreluche. Hardy was a man who loved racing. As an owner he raced in Winnipeg, Toronto, Florida, Nebraska and traveled to racetracks all over North America. Once he had built the Downs, Hardy also became a breeder, buying the large JY Farm, south of Winnipeg near Glenlea and St. Adolphe. Hardy, reportedly, did not have a favorite horse. When asked he’d say he just liked a horse that tried. However, May’s Relic was special. The colt won the Inaugural in 1967 and again in 1970 and also captured the R.J. Speers in 1967. He raced until he was 10 and was kept on the farm until he died. He was buried at JY Farm.