David Pinkney’s accomplishments in harness racing are extraordinary given the limited opportunity available in his native Maritimes. The native of Yarmouth, Nova Scotia, was born in 1932 and amassed 3,243 official victories. But there are unknown numbers of wins that were not recorded prior to the introduction of computerization. Pinkney’s career purse earnings stand at $2.4 million, which pales by today’s standards, but is quite impressive considering it was earned in an era when prize money wasn’t very substantial.

Described by many as the complete horseman, Pinkney made harness racing his full time vocation in 1959 and was annually at or near the top of the training and driving charts. His father, Kirk, got both him and his brother Phillip into the sport in which they excelled. David spent most his career racing for small purses in the Maritimes, but he did campaign at such tracks as Foxboro and Rockingham in New England, winning the Peter Haughton Stakes with Team Hanover.

In the 1960s Pinkney took over the stable of prominent horse owner Eric Whebby, and the two combined for a successful partnership which included a horse by the name of Waveore, who set numerous track records. In 1985 Pinkney enjoyed one of his most memorable achievements when he drove Waveore to a record 1:54.2f victory in the $50,000 Monctonian at Champlain Raceway. The win was not only a milestone for Pinkney, but also for the track and the Atlantic Provinces, as it was the first sub 1:55 mile in the Maritimes. The pair also established the 1:56 track record at Prince Edward Island’s Charlottetown Driving Park. Pinkney also posted the first sub 2:00 mile in the Maritimes with Peoples Blue Chip at the former Sackville Downs in Nova Scotia. Another good horse that Pinkney guided to victory was Vagabond Victor, who won the $48,000 Dairy Queen Futurity in 1992 when it was the richest race for juveniles in the region. Vagabond Victor was a son of Sherwood Abe, another free-for-all pacer that Pinkney helped develop. 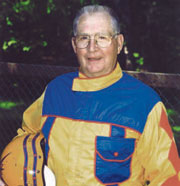