For more than 45 years Vic Rowntree ranked among the finest trainers and drivers during the pioneer days of standardbred racing in Canada. Born in Weston, Ont., he trained and drove the champion race-winning pacer of 1919, Jack Powers, to 16 wins. Vic won his fair share of races during Grand Circuit meetings in the 1930’s at Thorncliffe Park in Toronto. He drove the 3-year-old pacing colt Lee Note to a 2:09 1/2 win in the $3,000 Canadian Standardbred Horse Society Futurity, one of the earliest stakes events for young horses in Canada, in 1932 at the Canadian National Exhibition track in Toronto.

He won his second CSHS Futurity in 1940 with the 2-year-old pacing filly Patricia Baldwin in 2:17 1/4h at Glencoe, Ont. Two of his greatest achievements came in the early days of the prestigious Canadian Pacing Derby when the premier event for free-for-all horses was raced at New Hamburg, Ont. His first Derby win was with The Diplomat and he repeated with Captain Wright.

Rowntree operated a public stable throughout his career, campaigning at raceways and “one-day meets” in Ontario and Quebec and making frequent sojourns to U.S. tracks. His contemporary rivals included most of the top trainer-drivers of the pre-1950 era and numerous hall-of-famers including Nat Ray, Ben White, Sep Palin, Ralph Baldwin, Cliff Chapman Sr., Clint Hodgins, Tom Berry and Fred Egan. In recognition of his talents, Vic was in demand by many of his adversaries whenever they had a need for a catch driver. Born in 1887, Rowntree died in 1962. 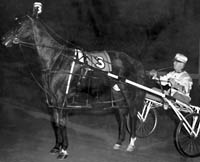