Morris Fishman’s life was the stuff of old-fashioned fiction. The gaunt-cheered little newsboy, fighting to protect his corner rights on the downtown streets of Toronto; growing to be, first an outstanding amateur pugilist, and then a first-class jockey. And in his middle years becoming an exceptionally successful trainer of thoroughbreds and finally the affluent man of property recalled author Jim Coleman in an obituary of this colourful horseman in September, 1976. Born March 3, 1911, Fishman’s first good horse was High Honors, which ran under the purple and green silks of his wife, Molly, and won The Jockey Club Cup and The Seagram Cup in 1940 at Old Woodbine.

He soon assembled a stable which was best in Canada. His patrons included Harry, Carr and Fred Hatch, Harry Lahman, Lou Chesler, and Frank Conklin. Fishman’s best horse was Canada’s Teddy, winner of the Canadian Championship at Long Branch in 1948 as well as Handicap Stakes at Dufferin, Thorncliffe and Woodbine. “The top performer in our handicap ranks is Canada’s Teddy. He stands alone, a favourite of the racing public and a credit to the training methods of Fishman, who brought an unsound horse to peak form and kept him there for the season,” said a columnist. Some of his other stakes winners were Be Brief, North York, Mugwump, First Note and Scene One.

It was said that the horses from Fishman’s barn invariably were beautifully turned out. They shone with health and vigor and their tacks always were immaculate. His last stakes winner was Painted Pony in the Belle Mahone in 1971. A co-owner of the Paddock Tavern, Fishman was a founding member of the HBPA in 1946. 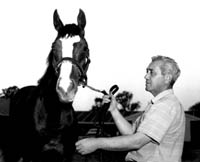