Jim Keeling Sr. will be remembered as a pioneer of contemporary harness racing in British Columbia. Known as “Senior”, Keeling was an irascible, straight-shooting businessman who was a stickler for punctuality. He always arrived at the track by seven o’clock in the morning. He did business by the motto “If you’re not here by 7 a.m., don’t bother to come at all. Keeling was a vibrant, larger-than-life character whose legendary frugality, cheeky humor, and rough-and-tumble style recalled a bygone era of the self-made man. 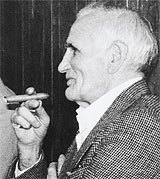 A native of Owen Sound, Ont., he worked in various industries before his introduction to harness racing. Keeling worked with his father cutting and hauling logs, in a lumber mill, an auto wrecking business and ran a successful Ford dealership. Following World War II he launched Dominion Motors, which set the stage for the purchase of Orangeville Raceway. Keeling’s passion for harness racing dates back to the late 1950s when a friend talked him into buying a horse and he partnered with Hall of Fame horseman Keith Waples. The pair raced a number of notable horses over the years, including the world champion gelding Hi Richard. But it was in racetrack ownership that the two truly excelled.

Keeling and Waples along with a third partner, Doug Gillespie formed the parent company, Orangeville Raceway Ltd. in 1969. He ventured west at an age when most men would have retired to give the Fraser Valley Fair board some help with a harness meet at Cloverdale. That evolved into his ownership and operation of Cloverdale Raceway in Surrey, followed by Sandown Park on Vancouver Island.

Because of his industrious drive, B.C. was blessed with two harness racing establishments. Both plants started modestly but soon transformed standardbred racing into major spectator attractions. Cloverdale the cornerstone of harness racing on the west coast opened on Jan. 1, 1976. In 1980 Keeling turned the reins of Cloverdale (now Fraser Downs) over to his son Jim Jr.

“Senior’s” grandson, Chuck Keeling, spent time as chief officer at Fraser Downs, Sandown and Hastings. Sandown began holding harness meets in 1978, thus ensuring a year-round circuit for the sport. Had it not been for the courage and vision of Keeling, a man possessed with a willingness to invest in the future, harness racing would likely have ceased to exist in B. C.. Keeling died in 1999 at age 92.