Born in 1906 in Raleigh Township near Merlin, Ont., Wellwood began a 65-year career as a standardbred trainer and driver about 1920. After a modest beginning on the Ontario fall fair circuit in the 1920’s and 30’s, he campaigned at the inaugural night racing meeting in 1940 at Roosevelt Raceway on Long Island, N.Y., and became a top reinsman and public stable operator at several Michigan and New York tracks. He finished his career at tracks on the Ontario Jockey Club circuit and other Ontario tracks.

Harold became one of the sport’s leading horsemen, widely know and well respected in both Canada and the U. S. He drove the winners of more than 2,500 races. In 1946, he drove Blue Again to a three-heat victory in the prestigious Canadian Pacing Derby at New Hamburg, Ont., in stakes and track record time of 2:04 1/2. In 1950, he won Canada’s premier event for older trotters, the Maple Leaf Trot at Thorncliffe Raceway in Toronto with Adeline Hanover. Wellwood was a driving force in the early years of the Ontario Sires Stakes program.

Following his death in 1989, he was eulogized by writer Robert M. Smith in The Canadian Sportsman as “truly a pioneer and in his own quiet and unassuming way helped to shape the sport he loved so dearly. In a sport whose records are often short lived Harold will always be remembered for his style as much as for his statistics.” He was the mentor of nephew William “Bill” Wellwood, a 2001 inductee to the Canadian Horse Racing Hall of Fame. 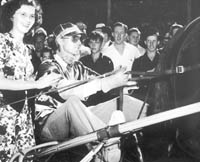