There wasn’t a more respected or knowledgeable horseman on Ontario’s racetracks in the 1930’s and ’40s than “Doc” – Robert Kerr Hodgson, a veterinary surgeon who ranked among the leader trainer of thoroughbreds. His influence on the history of Canadian racing and breeding is profound. If it wasn’t for Hodgson, Bunty Lawless would never have been born. It was “Doc” who convinced Willie Morrissey to breed his mare, Mintwina, instead of destroying her after she’d broken a bone in her foot. The foal by Ladder would later be acclaimed as Canada’s Horse Of The Half-Century.

Hodgson isn’t listed as a trainer when Bunty Lawless won the King’s Plate in 1938. Or in 1940 when Willie The Kid, who was also a son of Mintwina, won the Plate. He managed Morrissey’s stable for years and was unofficial trainer of both these champions. His fame as a trainer was evident in 1946 when Casa Camara, a robust filly, destroyed her male foes while winning the Cup and Saucer, Coronation Futurity, Clarendon and Diamond Ring Stakes (in a walkover). She also won the Princess Elizabeth Stakes.

Hodgson, who won the Prince Of Wales Stakes with Victory Arch, trained for many of racing’s elite – H.R. Bain, Mrs. R.E. Webster, George McCullagh, Allen Case, Bill Beasley, G.B. Elliot and Leigh McCarthy. Filsis, Double Briar, North York and Arbor Vita were some of his stakes winners. He was an outstanding hunt and horse show rider and trained for the leading steeplechase stables. A noted breeder, Hodgson owned a farm in Agincourt and was a graduate of Ontario Veterinary College. He died in 1951. 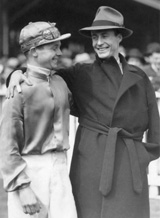