If great horsemen are born, not made, then William Wellwood is living proof. Over almost forty years he forged a reputation as one of the most astute horsemen, not just in Canada, but on a global scale. His ability to select yearlings and develop them into high caliber stakes horses is renowned, with plenty of evidence to prove the point. 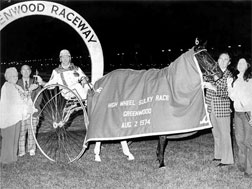 Writing on Wellwood’s induction, Dave Perkins of The Toronto Star, said: “He goes in not only because of his statistical record, close to unmatched in this country, and not only for his numerous titles as Trainer of the Year, and not because of the hundreds of star sulky-pullers that came out of his barn. He was a superior trainer and a driver who won a lot of races. Yet what truly sets Wellwood apart, and makes this honor so particularly fitting, is his other hat: He was a trainer of trainers. It wasn’t only championship horses that came out of his barn. Some horsemen learned their championship ropes there.” Bill O’Donnell, who broke in working for Wellwood, said, “You had to watch Bill to learn. He wasn’t much for explaining what he did, but if you watched and paid attention, you’d learn a lot. The thing he’d do with horses, the way he’d change equipment, their shoes, their training schedules. If you asked him what he was doing, well, he’d just get going with the hands, you know.”Everyone knew. Wellwood used to explain things with a two-part shrug: Hands up, palms out. The trademark gesture spoke volumes. Two others who cut their teeth in the Wellwood stable were Tom Artandi and Ben Wallace.

Wellwood started his own public stable in 1968 after working for his uncle Harold Wellwood for 11 years. His first winner was a trotter named Mr. Toy Town. The exploits of trotter Keystone Gary, a horse he purchased for $2,500, started him on the right track. Keystone Gary went on to earn over $320,996. Wellwood trained 1,014 winners during his career, and horses whose purse earnings exceeded $18 million. He drove 2,891 winners and horses that earned $15.7 million. As a director for the Ontario Harness Horse Association and the former Canadian Trotting Association, Wellwood ensured his total participation in harness racing and in those roles he helped to develop and implement policies that were integral to the state of harness racing in Canada today. He was an icon in North American harness racing and the fact that he was inducted in his very first year of eligibility speaks volumes about his talent and lifelong success as a horseman. In honor of this status in the industry, Woodbine renamed the Campbellville Stakes the William Wellwood Memorial Stakes in 2005. Wellwood died February 3, 2003, in Mississauga. 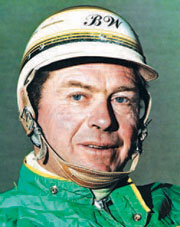