Willie Morrissey was the most caustic and controversial man ever involved in racing in Canada – a man who went from Toronto’s Cabbagetown to becoming one of the most influential men in the development of racing and the breeding industry. He owned and bred Bunty Lawless and Casa Camara, both members of Horse Racing’s Hall of Fame.

A dapper little guy who grew up on the streets of Toronto’s tough Cabbagetown, the feisty Irishman was an ex-newsie, midway barker, fight manager and promoter and hotel owner. Often unforgiving in his fueds with rival owners, trainers, track operators and racing organizations, Morrissey was a crusader for the lowly paid workers in the backstretch and in 1949 was the first president of the Horsemen’s Benevolent and Protective Association. He had a sentimental disposition and couldn’t do enough for anybody who needed assistance. Fans loved him; he was “one of the gang” who sat in the cheap seats. Officials usually disliked him since he was not a conformist. He defied tradition that the Plate was the property of the privileged and a “little guy” could win the race. He won it in 1938 with Bunty Lawless and 1940 with Willie The Kid.

Newspaper headlines and Morrissey were constant companions during a volatile career that lasted for more than three decades. His quarrel with Fred Orpen over the 128 pounds assigned to his 2-year-old filly Casa Camara in The Cup and Saucer at Long Branch percolated for years. 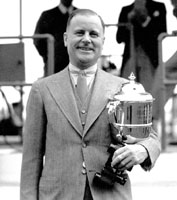