A tall, black filly whose long stride overwhelmed her male foes, Casa Camara was the outstanding 2-year-old of 1946. Owned and bred by Toronto hotel owner Willie Morrissey, the filly swept the major races – the Coronation Futurity, Cup and Saucer, Diamond Ring and Clarendon. She also won the Princess Elizabeth against the fillies. Her success was hardly a surprise. She was a half-sister to Plate winners Bunty Lawless and Willie The Kid at Woodbine and The Brat, winner of the King’s Plate in Montreal. At three and four she placed in stakes in Chicago and New York.

Casa Camara was involved in a bitter feud, one that began in 1946 when she was assigned 128 pounds in the Cup and Saucer at Fred Orpen’s Long Branch track. Morrissey was enraged at the weight, but his filly won easily. The following week in the Diamond Ring Stakes at Long Branch no other owner entered a horse, resulting in a “walkover” victory for Casa Camara. Morrissey, however, refused to leave his seat to accept the diamond ring from Orpen and instead sent Dr. Robert Hodgson, his trainer. Rebuffed by Morrissey, Orpen kept the ring. Morrissey “got even” with Orpen by naming many of his horses in a derogatory manner – Gem Thief, Hot Ice and Rabbit Mouth. Years later, after becoming a broodmare, Casa Camara had a filly, who won the Coronation Futurity against the males, just like her mom; was undefeated at age two and was the favourite for the Queen’s Plate in 1958.

Her name? Stole The Ring. 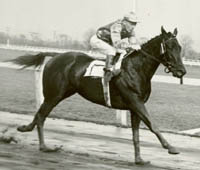