Thorncliffe Stable’s South Shore stands alone in Plate history. The 4-year-old black filly not only won the King’s Plate in 1922 at Woodbine Park after standing for more than a day in an ice pack to soothe a gimpy leg, but later gave birth to two foals who would also capture the Plate. Only three other Plate winning mares have ever produced a Plate champion – 1868 winner Nettie (Fanny Wiser in 1882), 1902 champion Lyddite (Shimonese in 1909) and 1991 Triple Crown winner Dance Smartly (Scatter The Gold in 2000).

South Shore was owned by the sons – George, Robert, Melville and Wilfred Davies – of the man who founded Thorncliffe Stable, the late Robert Davies of Todmorden Mills (now part of the Toronto suburb of East York). She was by the imported English sire Orme Shore, and was the first offspring of an incredibly fast sprinter, Southern Maid, a daughter of Kentucky Derby winner Plaudit. South Shore was hampered by an ailing leg throughout her limited racing career and at the age of four had only one race before her Plate victory for trainer Fred Schelke, who also trained her Plate winning son – Shorelint. 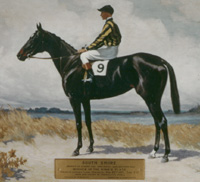