The hallmark of a truly outstanding horse lies in its ability to succeed on the racetrack and at stud. Apaches Fame is accepted for having made his mark in both disciplines; a Canadian-sired horse who not only was the fastest juvenile ever bred in this country but also winner of the $1 Million North America Cup at Greenwood in 1990. He retired with $1.7 million in earnings from 39 victories in 67 starts and a lifetime record of 1:51.4. From the mares who visited him at Glengate Farms in Campbellville have come numerous winners of $100,000 or more, the best being Canada’s Horse of the Year and world champion Odies Fame, who earned $1.4 million. 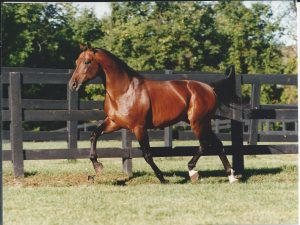 Apaches Fame’s story begins in 1986 when Bob Chapple of Chatham, Ont., bred his mare Dovers Skip to Apaches Circle, whose stud fee was a mere $2,000. In 1988 Fred Jewell of Dresden broke the horse before he was sent to Bud Fritz in Walkerton in 1989. In his first pari-mutuel start at Greenwood, the Kindergarten Series, he sped to an impressive l:57.4 and finished his stellar rookie season with 10 wins in 14 starts and a mark of 1:54.1 while winning the OSS championship.

His 3-year-old season in 1990 for Dovers Venture II Stable owners Chapple, Dr. Jan Vankleek, Ross Cushman, Tom Lightbody and Gary Nolte and driver/trainer Bud Fritz was a dream; one for the books. He attracted busloads of fans from southwestern Ontario to witness his “Cup” victory against the finest sophomore colts in North America. There was a celebration in the winner’s circle at Greenwood that hadn’t been seen since the days of Cam Fella. Naturally, Apaches Fame was the dominant force in OSS action that year, winning 20 of 26 races, which earned him an O’Brien Award as Canada’s champion 3-Year-Old Pacing Colt. Against open opposition that year he tied the track record in winning the Burlington Stakes and also posted wins in the Motor City Pace, Confederation Cup, Little Brown Jug Preview and the Provincial Cup and Prix d’Ete eliminations. At four Apaches Fame won the Grand Prix Quebec, Blue Bonnets Challenge, Des Smith Memorial and William Haughton Memorial Series at Yonkers.

From his first 11 crops, Apaches Fame had 66 winners of $100,000 or more and 106 performers with records of 1:55 or faster. Besides Odies Fame, he is the sire of Legacy of Fame, Stonebridge Galaxy and Twin B Champ.