If ever a horse changed the face of harness racing in Canada, it would be Balanced Image. His credentials as one of the world’s foremost trotting sires during the last 15 years of the 20th century gained more validity in 2000 when his son, Yankee Paco, captured the 75th edition of trotting’s premier event, the Hambletonian. It marked the first time an Ontario-based stallion had sired a Hambletonian champion.

The son of Noble Gesture – Well Molded, was bred by Castelton Farm, Lexington, and sold in 1979 for $32,000 as a yearling. He was a trotter of modest success. His fame came via his sons and daughters and raised the awareness of the Canadian-bred trotter around the world to an unprecedented level. Despite demonstrating a fluid natural gait and flashes of speed, his fiery temperament and soundness problems slowed his progress as a 2-year-old in 1980. He improved as a racehorse as he matured but soundness problems continued to plague him. At three he was second and third in stakes events. However, his season was abbreviated when he fractured a sesamoid bone in the Beacon Course Trot. He had five wins in 14 starts that season. Balanced Image had his best year as a 4-year-old in 1982, winning four of 13 starts including the American National Maturity. But a second fracture ended his racing career.

During a visit to Lauxmont Farms, Pa., Bob Burgess and his farm manager, Doug Nash, acquired Balanced Image for their Cantario Farms’ breeding operation at Campbellville. Unlike his slow developing racing career, his new vocation was an immediate success. One of the best horses from his initial crop was world champion Natural Image, who earned just over $400,000. Balanced Image was on his way to becoming a world-class stallion. While the name of his breeding empire changed to Glengate, under the ownership of Pat and Jim Bullock, Doug Nash continued to handle Balanced Image throughout his career.

Billyjojimbob, from Balanced Image’s smallest crop of 28 foals in 1987, propelled his sire to international prominence with victories in the Cadillac Breeders Crown and Elitlopp in Sweden. Breeding statistics for Balanced Image, who died in 2004, are overwhelming. His progeny have won more than $93 million. He sired 1,828 foals, including nine millionaire trotters, 241 winners of $100,000 or more and 50 with records of 1:55 or faster, including Goodtimes ($2.2 million), Glorys Comet ($2 million), Yankee Paco ($1.4 million), Rotation ($1.4 million), Impeccable Image ($1.2 million) and Liberty Balance ($1.1 million). 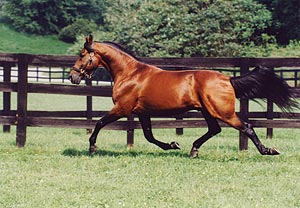