It was during a training session in Florida that Del Miller discovered Countess Adios was much better without hopples, a device designed to keep pacers on gait. The rest is history as she went on to become the greatest double-gaited mare, setting eight world records. Owned and raced by the Elgin and Ted Armstrong of Brampton, Ont., and Hugh Grant of Bradford, Pa., she had a pacing record of 1:57.3 and a trotting mark of 2:01.2 in a time trial when she retired in 1963.

A foal of 1957 and a daughter of the great pacing sire Adios, Countess had not worn hopples in her early lessons at Miller’s farm in Meadowlands, Pa., but had been fitted with “the pants” in Florida. Later that winter Miller discovered she was much better without them, and she never wore them again during an extraordinary five-year career. Few mares in the history of harness racing have been able to compete against their male counterparts successfully, especially pacers. In 1960 many of the major stakes races did not have filly divisions, so Countess Adios raced against colts and geldings, and won. Her versatility was evident by the fact that she competed at stakes calibre on both gaits. In addition to her numerous world pacing records, she could also trot, a gait she raced solely during her final season. When she won a trotting stakes at Maywood Park, Ill., her combined times for both gaits on a half-mile track established a world record.

Winner of 51 races, the free-legged pacer won numerous major events – the American-National, Governor’s Cup and the ultimate test of her greatness as a racehorse, the first two legs of pacing’s Triple Crown – the Cane and Messenger. She was not eligible for the final jewel of the crown, the Little Brown Jug. However, two days before the Jug, she set a world record over the same track. Her earnings at three were more than double those of the leading 3-year-old pacing colt that year and the most of any 3-year-old pacer, colt or filly, in history at the time. At three, Countess Adios established a world record for fastest combined two heats on a half-mile track and the fastest combined two heats by a mare of any age on a mile track.

She won 51 of 109 career starts and earned $316,999. In his biography, Mr. Harness Racing, Miller stated: “She’s the best mare I ever drove. I place Countess Adios on a par with and, in some cases, ahead of the greatest double-gaited mares, stallions and geldings of all time.” Following her racing career the Armstrongs assumed sole ownership of Countess Adios and she established the foundation of one of the more prolific maternal families in Canada. She produced five foals, all fillies. The best of her offspring on the track was Armbro Penny, a stakes winner at two and three. All of her daughters produced two-minute performers and the winners of more than $2.3 million, including Armbro Omaha, North America’s “Three-Year-Old Pacing Colt” of 1974 after becoming the first horse to win five $100,000 races in a single season. 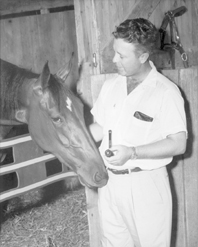