Watchim is the only trotter to hold trotting records for Nova Scotia, New Brunswick and Prince Edward Island at the same time. A foal of 1937, he was purchased for $450 by Frank Adams of Halifax, who owned him throughout his career. Watchim set 17 track records on the old Maine/New Brunswick Circuit and took his lifetime record of 2:06 at Orchard Beach, Me., at the age of 10. He had 79 lifetime starts of 208 heats, which included 108 wins. He eventually ran out of competition in the Maritimes and was taken to Maine for his final season.

Watchim was driven mainly by Billy Hood, who was one of the greatest trainers and drivers that ever performed over the half-mile tracks of Atlantic Canada. Born in 1890, the Cape Breton native began his career about 1914 when he trained horses for Bert Lint of Fredericton, N.B. He then trained and drove for Len Acker of Halifax. In the early 1920s Hood began breaking track records with castoff horses such as Dick C and the Ghost in North Sydney, Truro and the Black Diamond track at Glace Bay.

In the 1930s his top performers were Ruby P., Abbe Worthy, Neill Frisco, Calumet Brownie, Dermat and the great Calumet Budlong. While driving Watchim, the pair set 13 trotting records. Hood once held 44 track records, some of which still exist. He also campaigned in New England and later trained in Florida and Maryland. He died in 1957. 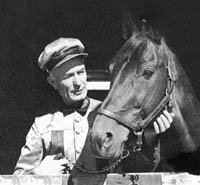