One of Canada’s leading owners and breeders in the 1960s and 1970s, George Ryerson Gardiner was recognized by The Jockey Club of Canada as its Man of the Year in 1985 for his considerable contributions to the sport. He was also honored by the directors of the Canadian Thoroughbred Horse Society in 1992 as its recipient of the Mint Julep Cup. It honors an individual who has made an outstanding lifetime contribution to the thoroughbred breeding industry in Ontario. Gardiner’s familiar fuchsia, white and blue colors dominated the winner’s circle for two decades. He raced more than 40 stakes winners that won 107 stakes races. His notable horses included St. Vincent, winner of the San Juan Capistrano Stakes Handicap at Santa Anita in 1955, defeating Kentucky Derby winner Determine; Frenetico, winner of the Canadian International Champion Stakes, Orbiter, Carney’s Point, Mary Of Scotland, James Bay, Plegada, Monte Christo II and Ice Water, the marvelous filly by Nearctic.

Gardiner Farms won a Sovereign Award in 1976 as Outstanding Owner in the wake of his stable leading the money winning-list seven times in eight years. In 1974 Gardiner Farms won 93 races for trainer Lou Cavalaris Jr., and $532,006, the first time the half-million dollar mark had been reached in the country’s history. Gardiner enjoyed considerable success as a breeder, twice winning a Sovereign as owner of the Broodmare of the Year in 1977 (Doris White, dam of three stakes winners) and again in 1982 (Yonnie Girl, dam of three-year-old champion Runaway Groom, winner of two jewels in Canada’s Triple Crown and the G1 Travers Stakes at Saratoga, N.Y.).

A successful financer and former chairman of the Toronto Stock Exchange, Gardiner established a 450-acre breeding and racing establishment in Caledon East in the 1950s, which he developed into a successful stallion station that included an indoor and outdoor training track. Through the years he acquired a quality band of broodmares and was one of the original members of the Northern Dancer syndicate. Gardiner was vice- president and trustee of the Ontario Jockey Club for many years. His love of horse racing had its beginnings in Mexico, where at the age of five he accompanied his father and trainer Arthur Brent on an extended campaign at Tijuana. He ran his first horses in Toronto in 1946. Gardiner also was a partner in horse ownership with Max Bell of Golden West Farms in Alberta. Born April 25, 1917, Gardiner died at age 80 on December 7, 1997. Prior to his death he and his wife Helen founded the Gardiner Museum of Ceramic Art in Toronto in 1984. 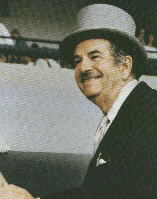