For many people in harness racing the name Mike MacCormac is synonymous with the sport in Montreal. His relationship with the game in Canada’s second largest city dates back to 1953 when he began working at Blue Bonnets Raceway (later renamed Hippodrome de Montreal) as a part-time employee in the race office at the age of 17. MacCormac wanted to get involved in training but his allergies to horses presented an obstacle. For the next 32 years he forged a career as one of this country’s foremost racing administrators. He progressed from assistant race secretary to race secretary, then to Director of Racing, vice-president and ultimately to senior vice-president before leaving Blue Bonnets in 1985 to join United Tote Company. At United Tote he served as vice-president of Canadian operations through to 1994. He came out of a three-year retirement and a 12-year absence from racing in Quebec, to return to take a position in 1997 with SPICC (now known as SONACC), the agency which oversees racing in the province. MacCormac was responsible for working with the racing secretaries of Quebec’s four standardbred tracks to oversee stakes programs, and coordinate programs and conditions with a goal of upgrading the live product and improving the handle.

Despite the length of MacCormac’s resume, the 64-year-old Montrealer will forever be remembered for his efforts to make Blue Bonnets Raceway a showcase for harness racing in the 1960s, 1970s and 1980s. He created two of that track’s signature races, the Prix d’Ete and Prix de L’Avenir, formerly two of Canada’s premier pacing events. The Prix d’Ete was launched from Blue Bonnets Centennial Pace in 1967 which became the Prix d’Ete the following year. At that time it was for older horses but in 1971 the conditions changed to three-year-olds which had clearly become the glamour division of harness racing. These races were very successful not because of the purse money, which was excellent, but because Blue Bonnets established a reputation that all owners and trainers who came to race in Montreal would be treated like royalty. These two events were able to attract the best horses because of this and due to the efforts made by MacCormac.

His participation extended beyond Montreal. On the national level he served as president of Racetracks of Canada from 1980 to 1981 and was a director of the Canadian Trotting Association from 1973 to 1985. Internationally, he was a member of the Harness Tracks of America Executive Committee from 1973 to 1976. In 1999 Hippodrome de Montreal introduced the $500,000 Trot Mondial and MacCormac played a major role in this international trotting race which was contested over a distance of one mile and three-eighths. 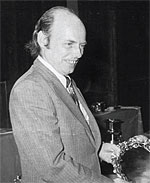