Born in 1866 in Toronto, McBride is one of harness racing’s successful and colourful links with the early days of the sport in Canada. He was a founding member and charter director of the Canadian Standardbred Horse Society which was organized in 1909 as the official registration authority for Standardbred horses in Canada. He was president of the Society in 1919 and 1920.

McBride was also a founding director of the Canadian National Trotting and Pacing Harness Horse Association, the first harness racing regulatory body in Canada and a forerunner of the Canadian Trotting Association and Standardbred Canada. He was president of the Toronto Driving Club which operated Hillcrest Park and Dufferin Park, both Toronto racetracks, and a director of Kenilworth Park, a track in Windsor, Ontario. In 1907, McBride drove his King Bryson to a world record of 2:19 1/2 for trotters over a half-mile track on ice at Plattsburg, New York.

When not involved in his various racing endeavors, McBride operated a lumber business and was an alderman, including three years as Mayor, of Toronto for 30 years. 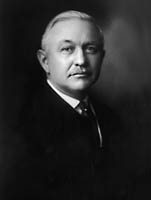