During the 1950s and 1960s there was hardly a stakes race on the Ontario Jockey Club circuit that trainer John Passero did not win. Known affectionately to his backstretch contemporaries as “Pass Eye”, Passero had a huge following of $2 bettors when “New” Woodbine opened in Rexdale, Ont., in 1956. He won almost everything in sight that year while training Canada’s Horse of the Year, Bill Beasley’s Canadian Champ.

A bay colt by Windfields, Canadian Champ won the first running of the Queen’s Plate at the new track in suburban Toronto as well as the Prince of Wales and Breeders’ Stakes.”The Champ” also won the Achievement Stakes, Plate Trial and Seagram Cup Handicap in 1956. The colt was the champion two-year-old in 1955 when he won the Coronation Futurity and Cup and Saucer Stakes. Stable hands called him “George” and later “King George” after his 20-win total, 15 in stakes races. He set track records at four, including one on the turf at Hialeah. In 2007 the colt that helped define Passero’s career was inducted into the Canadian Horse Racing Hall of Fame. 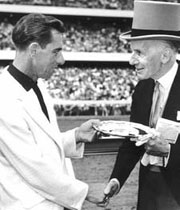 A native of Fort Erie, Ont., Passero also trained another truly outstanding individual, Hidden Treasure, a champion at ages two and three. Owned by Beasley, Hidden Treasure added seven stakes victories to put Passero’s career total to 60 stakes wins. Some of his other outstanding stakes winners included Pink Velvet, the Canadian Oaks’ winner Yummy Mummy, Royal Spirit, Windy Ship and Skinny Minny. The My Dear Stakes was a favorite race for Passero as he won it seven times between 1951 and 1962. Among the owners he trained for were Jack Stafford, Jim Cowan and George Frostad.

The last match race held in Ontario, at Woodbine in 1962, was won by Stafford Farms’ Cesca. Trained by Passero, the filly defeated Aim N Fire, a colt handled by Frank Merrill Jr. On three occasions Passero was the leading trainer at the Woodbine meeting while competing against Merrill, Carl Chapman, J.C. Meyer and Pete McCann. In 1960, 1961 and 1962 he was among the top three trainers in final season standings at Woodbine, Greenwood and Fort Erie. Born in 1914, Passero died suddenly in 1963 at age 49. He began his race track career as a jockey in 1929, winning on his first mount, Play Flower. His nephew, Frank Passero Jr., was one of the leading trainers in North America in the 1990s and early 2000s. 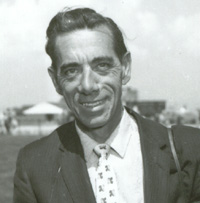