When Don Seymour retired following the 1994 season, the 34-year-old jockey took with him an unparalleled accumulation of records. At the time he was the only rider to win four Sovereign Awards (a record later broken by Todd Kabel). He was also the only man to ride two Triple Crown winners in Canada – With Approval in 1989 and Izvestia the following year. Both colts were owned by Kinghaven Farms. A year after he retired with a career total of 2,138 victories he was honoured as a recipient of the prestigious Avelino Gomez Memorial Award, which goes to a jockey who has made a significant contribution to horse racing. 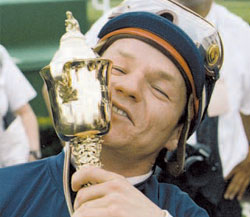 Born in Hamilton, Ont., on December 12, 1960, Seymour grew up in Etobicoke near Woodbine race track, but started his career in Western Canada. He was not only Alberta’s leading rider from 1981 to 1986 but Canada’s as well in 1985 when he won his first Sovereign Award as the country’s champion jockey. Seymour tackled the tough Ontario Jockey Club circuit in 1986 but returned to the Western circuit in 1987. His 105 wins that year earned him his second Sovereign Award. 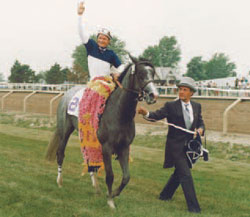 Seymour’s affiliation with Kinghaven Farms and trainer Roger Attfield in 1989 secured him the call aboard With Approval, Canada’s first Triple Crown champion in 26 years. Seymour’s rides in both the Queen’s Plate and Prince of Wales enabled the roan colt to win by margins of a nose and a head in the first two jewels of the Triple Crown. Purse earnings of $4.85million and 15 stakes winners gained Seymour a third Sovereign Award that year. In 1990 he was just as successful, guiding Izvestia to the Triple Crown and a huge win in the Molson Export Million and a record fourth Sovereign Award.

He has ridden in racing’s glamour event, the Breeders’ Cup, finishing second aboard Canada’s Horse of the Year in 1988, Play The King, in the Sprint at Gulfstream Park, Fla. In his final season at Woodbine his mounts earned almost $2 million, all from only 229 mounts. He won 10 stakes races, including the Mazarine aboard Sovereign Award champion juvenile filly Term Limit, and the Marine and Elgin Stakes aboard Cheery Knight. His last ride at Woodbine was aboard champion 2-year-old Talkin Man.

Ill health prompted his early retirement at age 34. For several years he was a placing judge and official clocker in the early morning workouts before finally quitting the track in 2002.