Gordon Rumpel, a retired automobile dealer from Calgary, drove almost naively into heady success when he bought On The Road Again for $10,000, a purchase that by 1985 saw him and his wife Illa become owners of the richest pacer in history (at that time) with earnings of $2.8 million. Was it a bit of magic, or uncanny luck? Luck was definitely part of it. Rumpel bought On The Road Again, a son of Happy Motoring, on a wing and a prayer. He went to a mixed sale at the Meadowlands prepared to buy a mare that was later withdrawn. Rumpel then bought two aged pacers and a weanling whose name would be later abbreviated to OTRA by his legion of fans and the media. He then turned him over to Harry Poulton to train and manage.

“I always loved chestnuts, and Road didn’t have any white feet. Trainers don’t like white feet. I was naïve. And I thought I would get him cheap because of the kind of sale he was in,” said Rumpel, who later bought property near Port Perry, Ont., with the colt’s earnings and named it On The Road Again Farms. Poulton raced On The Road Again five times, winning four as a 2-year-old at Calgary’s Stampede Park. In his last start he set a track record of 2:00 for juvenile colts.

Before his illustrious career ended he was voted Canada’s Horse of the Year for 1984 and 1985. The USTA and the CTA also voted him Three-Year-Old Pacing Colt of 1984 and Aged Pacing Horse of 1985. During his sophomore year OTRA won 18 of 26 races and $1.7 million. With Buddy Gilmour driving in most events, his wins included the $1 Million Meadowlands Pace, Cane Pace, Confederation Cup, Western Canada Pacing Derby, New Jersey Classic, Shelly Goudreau Memorial Series, Provincial Cup, Lucky Strikes and Nat Christie. In the Meadowlands Pace, he left from a second tier trailing post position and had to weave his way through traffic to get up for a neck victory in a season’s best 1:53.3.

OTRA won over $1 million as a 4-year-old, winning the Canadian Pacing Derby, Mohawk Gold Cup, Stewart Fraser Memorial, Blue Bonnets Challenge, Levy Memorial, Chesapeake and the Yonkers Fall Championship. A model of consistency, On The Road Again finished back of third only once while winning 22 of 30 races. In the World Cup Pacing Championship, he raced at three different distances over three weeks and was the only horse ever to win all three.

OTRA retired with 44 wins in 61 starts at 16 racetracks. Retired to stud at Blue Chip Farms in New York, On The Road Again sired the winners of $68.6 million. His offspring include 221 with marks of 1:55 or faster and 194 winners of $100,000 or more, including Hoist The Colors, Delinquent Account and Silent Spring. One of OTRA’s daughters produced the $2.7 million winner Four Starzzz Shark, 1:47.4. 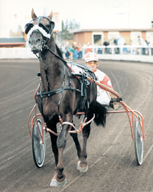