The achievements of Roger Attfield are unprecedented in the contemporary history of thoroughbred racing in Canada. Six times between 1986 and 2002 he was voted a Sovereign Award as this country’s Outstanding Trainer. The tall, dapper English-born conditioner had also won the Queen’s Plates even times. Attfield is also the only man to train three Canadian Triple Crown winners – Izvestia, With Approval and Peteski. He also holds the record for training six horses that were named Horse of the Year. And to top it all off, he had accumulated 40 Sovereign Awards, and counting.

Attfield, who turned 60 in 1999, was in his first year of eligibility for induction into Canada’s Horse Racing Hall of Fame and was a unanimous selection. Born in Newbury, Berkshire, England, Attfield had a varied background in the equine industry before immigrating to Canada in 1970. His early career included riding internationally at show jumping events, a degree in agriculture, specializing in farm management, and a brief career as an amateur steeplechaser. In 1971 he began his training career in Canada at Roy Kennedy’s Gateway Farms in Milton, Ont. Four years later he took over as head trainer of Charles (Bud) Baker’s Norcliffe Stable and won the Queen’s Plate with his first starter in the prestigious race, winning with Norcliffe. 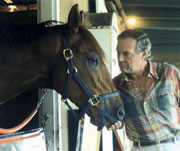 Attfield’s career soared after he took charge of Bud Willmot’s powerful stable of Kinghaven Farms in 1985. He won his second Plate in 1987 with Market Control and then earned $1 million bonuses for Kinghaven when With Approval and Izvestia won back-to-back Triple Crowns in 1989 and 1990. The 1990 season was particularly satisfying for him as Kinghaven led all stables in North America with money earning of more than $5 million. Peteski, owned by Earle I. Mack, swept the Triple Crown races in 1993 for Attfield. He also won the Plate in 1992 with Kinghaven’s Alydeed and No. 1 Stable’s Regal Discovery in 1995. Attfield won the Canadian Oaks, the premier race for 3-year-old fillies, with Capdiva, Plenty of Sugar and Playlist. 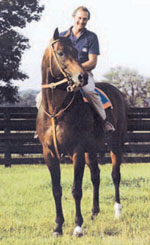 Leading trainer twice at Woodbine, he had amassed almost 1,500 wins when the 2007 season came to an end. His horses, which had won 308 stakes races, had earned almost $70 million. Attfield divided his training duties at his residences at Upper Acres in Nobleton, Ont., and Lower Acres in Palm City, Florida.

Roger Attfield was inducted into the National Museum of Racing’s Hall of Fame in 2012.    During a press conference with the inductees, Roger Attfield expressed his appreciation and gratitude for the honour. “I was so proud to be inducted into the Canadian Hall of Fame at the minimum age of 60. Now to be honoured to go into the US hall as well when I have so much pride and respect for the sport means a great deal to me. I am absolutely ecstatic, especially to be inducted at the same time as so many people I have respected over the years, Johnny Velazquez rode for me, and Frank Stronach I have known for years, and admire and respect him. It is a wonderful honour and I am very touched by it.” 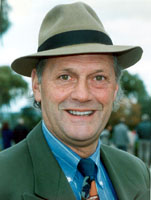