Long before they began presenting Sovereign Awards for leading trainer or champion horses and jockeys, there was a horseman who would have won more than his share of trophies. Jerry Meyer was Canada’s leading trainer -in 1964, 1966 and 1969. He saddled 152 winners in 1969, which placed him fourth amongst all trainers in North America. From 1961 to 1971 he challenged future Hall of Fame trainers Frank Merrill Jr., and Lou Cavalaris Jr., along with Andy Smithers, for training honors, finishing among the top three trainers each year on the competitive Ontario Jockey Club circuit. The year after The Jockey Club of Canada inaugurated the Sovereign Awards program, Meyer trained Canada’s leading 2-year-old filly, Northernette. She won the Canadian Oaks and was the favourite a week later in the Queen’s Plate. She lost by a neck in the mud to Sound Reason but was champion 3-year-old filly of 1977 and later would be inducted into Canada’s Hall of Fame.

Meyer, whose training career began in 1949 and continued a half-century later, enjoyed a distinguished career both in Canada and the United States, training for many of the leading stables on the continent. He won more than 2,500 races. His starters, which include more than 100 stakes winners, earned in excess of $19 million. A native of Kitchener, Ont., Meyer began his racetrack career in themid-1940s as a hot walker for “Blodgie” Chris. Meyer rode briefly as a teenager, winning one race, on Hay Tip at Dufferin Park before gaining his trainer’s license at the age of 20. 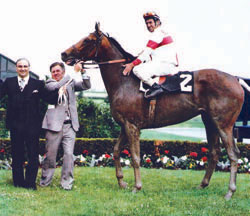 He operated stables in both Canada and the United States for much of his career. At times he had horses running at three or four different tracks on the same afternoon, and literally was “here, there and everywhere.” His main owners in Canada were Ed Seedhouse, Saul Wagman, Ted Smith, Syl Asadoorian, Sam Cosentino, Jim Black and Steve Stavro.

Meyer died July 15, 2005, at the age of 78 at Princess Margaret Hospital in Toronto of cancer. He was buried with his favorite tools – his binoculars and the notebook he carried everywhere. The only thing missing was the plastic shopping bag he always toted. It would be full of everything that mattered: racing forms and programs, a notebook or two. Everything else he needed was in his head. His mind was like an efficient computer, with some lively quirks said author Beverley Smith in his obituary. Meyer had a memory that astonished his peers. He’d see a yearling once at a sale and years later would recognize it, like a familiar face. He knew all the pedigrees and racing records, not only of his own horses but those of every other trainer. 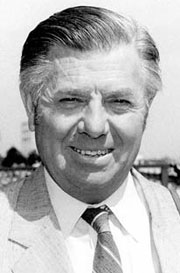