Robert (Bobby) Watson absolutely dominated horse racing in Ontario in the 1940s, winning two of the most important races – the King’s Plate and the Canadian Championship – during an era in the sport when crowds of 40,000 were not unusual at Toronto’s famed Woodbine Park on Queen Street East. Watson won the Canadian Championship (later named the Canadian International Championship) three years in a row when the race was staged at the Dufferin track in downtown Toronto – Shepperton in 1942 and 1943 and Be Brief the following year. At Woodbine he captured the Plate for Harry C. Hatch in 1941 with Budpath and then Acara and Uttermost in 1944 and 1945. Watson also finished second in the Plate twice and was third three times. 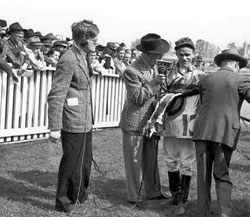 Most of his major stakes triumphs came for either the table of Hatch and trainer Cecil Howard or horses trained by Fred H. Schelke. Watson, born in Aberdeen, Scotland, in 1913, rode more than 1,300 winners during a period when racing seasons were of a much shorter duration than today. He rode on the Ontario circuit for more than 25 years, when racing ranged from Fort Erie, Stamford and Hamilton, to London and the Toronto-area tracks – Woodbine, Dufferin, Thorncliffe and Long Branch.

A dapper dresser whose well-tailored suits and wide-brimmed fedoras were a trademark, Watson retired from riding in the 1950s and immediately was recruited as a racing official. Watson was a steward in the 1970s and 1980s before retiring. He died in 1997. 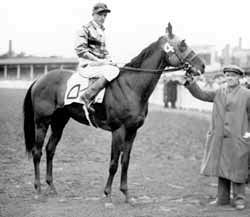