There wasn’t a more dominant horse on the grass in North America in 1992 than Sky Classic, a chestnut colt owned and bred by Ernie Samuel‘s Sam-Son Farm of Milton, Ont. He won the Eclipse Award as the Champion Turf Horse for trainer Jim Day and the jockey who rode him for much of his career, Pat Day.

A son of Nijinsky II and out of Sovereign Award and Hall of Fame mare No Class, Sky Classic exhibited his class as a two-year-old, winning the Cup and Saucer, Grey and Summer Stakes and earning a Sovereign in 1989 as Canada’s champion juvenile colt. A serious injury to his hind leg prevented him from competing for most of his 3-year-old season. His best effort was a second-place finish to French Glory in the Rothmans Ltd. International Stakes. However, he rebounded magnificently in 1991, winning more than $1 million while earning two Sovereign Awards as champion older horse and turf horse in Canada. His stakes victories that season came in the Connaught Cup, King Edward Gold Cup, Seagram Cup Handicap, Canadian Maturity and the Rothmans, where he established a turf record for 11/2 miles.

He retired in 1993 with a career record of 15 wins and 22 in-the-money finishes in 29 starts and earnings of $3,240,398, a record at that time for a Canadian-bred colt.  Retired to Pin Oak, Sky Classic has sired six champions, 59 stakes winners, ten G1 winners, and a total of 106 stakes horses in 19 crops to race. Additionally, he is the sire of the dams of 43 stakes winners including three champions, as well as English Classic winner Speciosa and 2014 G1 winner La Tia.  He was retired from breeding in January of 2015 and passed away of natural causes on April 30 that same year. 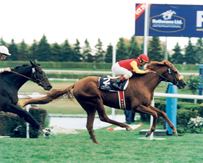