Clint Galbraith is probably best known for his brilliant campaigning of the legendary super horse Niatross. A native of Tara, Ont., Galbraith brought harness racing history into a newer a with the exploits of arguably the greatest horse of the 20th century. Niatross was the harness horse of the year in 1979 and 1980, winner of 37 of 39 races, harness racing’s first $2 million pacer and formerly the fastest horse of his era by virtue of his unforgettable 1:49.1 time trial in the fall of 1980. At the time it was described as taking harness racing to a whole new plane. Niatross won such prestigious events as The Cane, The Meadowlands Pace, Woodrow Wilson and the Little Brown Jug, to name a few. Galbraith’s superior horsemanship made this all possible, but his accomplishments as a trainer/driver didn’t begin or end there. 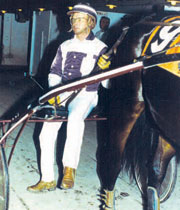 The 1988 season saw Galbraith’s rugged pacer Call For Rain top the aged pacing division and equaled Nihilator’s clocking, which at that time was the fastest race mile ever when he soared around Lexington’s Red Mile in 1:49.3. This time also established a world record for four-year-old pacers on a mile track. Call For Rain, a two-time Breeders Crown champion, also won the Graduate Series Final, the Driscoll Series and a division of the Molson Export Pacing Series in 1988 and earned more than $1 million. Galbraith also handled two-year-old trotting filly ED Kash that year, winning three legs of the New York Sires Stakes, and a division of the historic Acorn, which added to her earnings of almost $125,000.

Galbraith got into harness racing as a teenager in the mid-1950s, left Canada in 1957 and settled in on the Buffalo/Batavia circuit, which remained his summer base of operations. He made his home at Rodney Farms in New York State. He survived a run of bad luck in the early 1960s, including a disastrous back-stretch fire at Batavia Downs that claimed many of the horses in his stable, when he sustained a fractured kneecap in a racing accident. However, he rebounded from both mishaps to garner the dash/win title at Batavia in 1963. Galbraith dominated the New York Sires Stakes winner’s circle for years with such horses as Shoshone Kash, Kash PDQ, Nick Kash and Top Freight. Other noteworthy performers that benefited from Galbraith’s adept training and driving skills included Millers Joy, Looks Like Rain, Frank Hanover, BJs Pleasure, ABC Freight, Lucretias Kash and Alls Great. During his career he drove almost 2,800 winners and horses that earned over $18 million in purses. 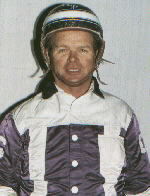