Gord Huntley’s talent as a trainer during his 50-year career was two-fold. He saddled almost 1,000 winners and won more than 70 stakes races. However, it was his uncanny ability to spot and purchase unheralded yearlings with unfashionable pedigrees that earned him the respect and admiration of the racing community. Angle Light, which he bought for $15,000 and wound up in the barn of trainer Lucien Laurin, upset his stable mate Secretariat in the Wood Memorial at Belmont in 1973. Another of his bargain discoveries who would blossom for another trainer was Dawsons Legacy, which he bought out of a field in Kentucky for $7,500. In 1997 the two-year-old gelding won a Sovereign Award with earnings of $275,000 with second-place finishes in the Breeders’ Cup at Hollywood Park, Calif., and the Grey and Summer Stakes at Woodbine. 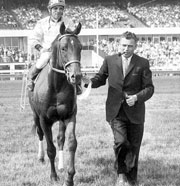 Dreamy Prospect, one of the fastest sprinters in North America in the late 1970s, and Braze and Bold, were bought and originally conditioned by Huntley. Each won the Derby Trial at Churchill Downs. Other Huntley “finds” were Banner Bob, a $10,000 purchase which won the Jim Beam Stakes, Sunny Blossom, who won a sprint at Santa Anita in 1:07 “and change” and Crimson Streak. Huntley was leading trainer at Greenwood five times. In recent years his most impressive champion was Sovereign Award winner Ada Prospect. During the 1950s and sixties his multiple stakes winners were Silver Ship, Ramblin Road and Monarch Park. In the 1970s and eighties his big horses were Silverbatim, Bay Streak, Park Regent, Bed Knob, Chill Up and Bodust.

Born in Queensville, Ont., in 1919, Huntley got his start at the track with veterinarian and trainer Dr. R.K. (Doc) Hodgson, a future Hall of Fame inductee. In the late 1940s Huntley shipped west to California and rubbed horses for Reggie Cornell, whose clients included movie star Betty Grable and bandleader Harry James. He also worked for future Hall of Fame trainer Jim Bentley. One of the horses he “rubbed” for Bentley was Hall of Famer Arise. In 1950 Huntley opened a public stable. Among his clients were Gordon Hall, Harry Addison Sr., C.F.W. Burns, Brian Cullen, Tom Joy, Richie Papa, Ed Whittaker, Sam Young, Lionel Schipper and Kinrara Stable. Huntley was in his 79th year when he died on July 25, 1998. 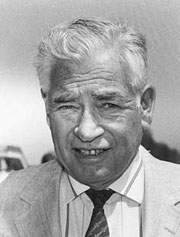