Someone once said that harness racing in Canada would be in a much healthier state if all of its owners were as passionate about the game as John Grant. It’s an assessment that is hard to argue with. John Grant, who was born in 1925 in Westport, Ont., owned and operated one of the most successful stables of standardbreds in Canada during the 1980s and 1990s. Grant bred or owned a steady parade of notable performers, which would include such memorable performers as Jambo Dancer, Keystone Ponder, Hornby Glory, League Leader, Hornby Tora, Hornby Judy, Armbro Luxury, Classic Wish, Beach Ray and Barnett Hanover. Another was Daisy Harbor. The Coal Harbor filly provided Grant with some great memories. She ended her Ontario Sires Stakes’ by becoming the first female in the history of the OSS to go undefeated, winning 19 consecutive races in 1991. At the time she was the fastest Canadian-bred filly when she took a time trial of 1:53.3. 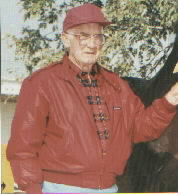 Always a strong proponent of racing in Canada, Grant was instrumental in the building and development of Flamboro Downs in Dundas, Ont. He was successful in the trucking business and took the time to indulge himself in harness racing. He operated his stable from his farm in Hornby and the Hornby prefix is a common feature on Grant horses. For years he was a familiar figure at the industry’s yearling sales and annually was one of the most active purchasers. In 1977 Grant paid a record $136,000 for 5-year-old stallion Jambo Dancer, who would go on to earn over $400,000. Previously Grant held the Canadian sales record when he spent $120,000 for Keystone Ponder in 1974, who earned $350,000. Over the years Grant has been associated with horsemen Buddy Gilmour, Ross Curran, Bill Wellwood, Peter Gillies and in more recent years Scott McEneny.

Semi-retired in the late 1990s, Grant kept his hand in the family-owned trucking business and he and his wife Kay (married 50 years) also oversaw the operation of their 70-acre farm. Breeder, owner, racetrack developer – John Grant quite literally did it all. 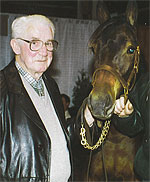