Ernest Lionel (Ernie) Samuel, who had owned thoroughbreds since 1971, was arguably one of the most influential and powerful forces in horse racing in Canada during the 1980s and 1990s. His list of achievements, both in Canada and the United States, were truly remarkable. The first Canadian owner to capture the coveted and prestigious Breeders’ Cup races, with Dance Smartly in 1991, and Chief Bearhart in 1997, Samuel was honored with almost every award possible in thoroughbred racing. He was named Man of the Year by the Jockey Club of Canada in 1991 when his horses established a world record, earning more than $6.8 million in purses. Owner of Sam-Son Farm, which had two divisions – a training centre in Ocala, Florida, and a broodmare operation in Milton, Ontario – Samuel had a broodmare band of more than 30 mares, including Canadian Triple Crown winner Dance Smartly, a member of the Hall of Fame and Breeders’ Cup Distaff Stakes winner at Churchill Downs in Kentucky, and No Class, who died in 1993. She was the wonderful foundation mare of Samuel’s nursery. She was inducted into the Hall of Fame in 1997. 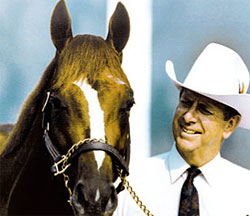 Samuel, born on October 16, 1930, in London, England, was vice-president and a Trustee of the Ontario Jockey Club (now Woodbine Entertainment Group), Steward of the Jockey Club of Canada, member of The Jockey Club (New York) and a director of the Breeders’ Cup. He earned 38 Sovereign Awards, winning Horse of the Year honors six times (Dauphin Fabuleux, Imperial Choice, Ruling Angel, Chief Bearhart twice and Quiet Resolve), leading owner six times and Breeder of the Year three times. In 1991 he received an Eclipse Award in the United States as Owner of the Year. His Eclipse Award winners are Dance Smartly, Sky Classic and Chief Bearhart. He also won the Queen’s Plate with Regal Intention and Dance Smartly. Honored as an Officer of the Order of Canada in 1998, Samuel was Chairman and Chief Executive Officer of Samuel Son and Co. Ltd., an internationally-competitive steel and aluminum distribution business founded by his great-grandfather in 1855, and Samuel Manu-Tech Inc. He was a generous benefactor to many institutions in the Toronto cultural and health sectors and supported Canada’s international equine jumping team for many years. Well acquainted with the hunter and jumper world, he owned a show horse stable in Oakville that was managed by equestrian Jim Day, who would later train Samuel’s thoroughbred stable. Day sold him Canadian Club, who was on Canada’s gold medal winning team at the 1968 Olympics in Mexico, and also won a gold medal at the Pan-American Games in 1967 in Winnipeg.

Samuel died on May 25, 2000, a month before a colt he had bred, Scatter The Gold, won the Queen’s Plate. He was a son of Dance Smartly. 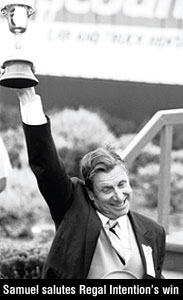