A jockey whose best performances often came in stakes races, Robin Platts was one of three riders to win the Queen’s Plate a record four times. The other two – Sandy Hawley and Avelino Gomez – are also in the Hall of Fame. His victories in North America’s oldest continuously run stakes race came on Green Hills Farm’s Victoria Song in 1972, Stafford Farms’ Amber Herod in 1974 and Sound Reason in 1977 and B.K.Y. Stable’s Key to the Moon in 1984. Platts’ last three Plate wins came for Hall of Fame trainer Gil Rowntree. Victoria Song was trained by Larry Grant. 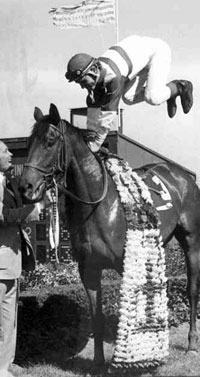 Born in Leicester, England, on April 27, 1949, Platts was 15 when he wrote a letter to the track, telling them of his ambition to ride. At the time he’d never been on a horse. He rode his first winner, Lily, at the old Greenwood track in Toronto’s east end on November 18, 1966. She paid $87. His first major stakes triumph came two years later at Woodbine when he won the Canadian International Championship on Gardiner Farm’s Frenetico. Much of Platts’ early success came while working as the stable rider for Hall of Fame trainer Lou Cavalaris, who once said of Platts, “You could tell right away the lad had never been near a horse before. He must have been thrown 100 times. But he showed such guts and determination. His progress in two years from absolute scratch in riding was nothing short of fantastic.” 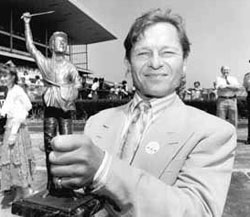 Platts planned to retire prior to the 2000 season at the age of 51, which would have been his 35th year on Woodbine’s Ontario Jockey Club circuit. But he delayed his retirement announcement until June of that year. He was supposed to ride at Fort Erie that weekend. “It had been on my mind for a while. I’m healthy – better than I was years ago. But the way it was, I couldn’t do my best any more. It was the toughest decision I ever had to make,” he said a day later at Woodbine. Weight problems had plagued him in recent years and he’d often thought of calling it a career. “But after a day or two I’d get the itch to ride again.” During his career he accepted 20,409 mounts, winning 3,245 races. His mounts earned almost $40 million. Injuries in both the 1998 and 1999 seasons curtailed his riding activities. Winner of the coveted Avelino Gomez Memorial Award in 1992 for contributions to the sport in Canada, Platts also earned a Sovereign Award as Canada’s Outstanding Jockey in 1979.

Platts won close to 250 stakes races. During one eight-year span, from 1976 to 1983, he was the leading stakes’ winning jockey seven times. He was the leading race winner at two Woodbine meetings and five times led all jockeys at Greenwood during that track’s spring meets. In 1968 he won a career high 219 races. His best afternoon came on September 8, 1971, when he booted home six winners and just missed a seventh, finishing second by a length. Platts often represented Canada in international competitions, riding in South Africa, Bahrain, Japan and Europe. Among his countless stakes winners were future Hall of Fame inductees Overskate, a winner of nine Sovereign Awards, Glorious Song, Izvestia, Frost King, Norcliffe, Carotene, Runaway Groom along with champions Grey Classic, Allan Blue, Thunder Puddles, Charley Barley, Play The King and Cozzene’s Prince.