The only photographer to win three Eclipse Awards for outstanding thoroughbred photography in North America, Michael Burns worked at racetracks since 1943 when he started as an apprentice at “Old” Woodbine in downtown Toronto. Burns also earned a record five Sovereign Awards for “outstanding photography”. He zoomed in on sports action around the world for the six decades, but had a special feeling for thoroughbreds. He was the official photographer the Ontario Jockey Club (now Woodbine Entertainment) since the early 1950s and is one of Canada’s best known photographers. His equine “art” helped promote racing for more than 50 years. While working for Turofsky Photos in the 1940s and 1950s Burns’ camera was busy during the National Hockey League season at Maple Leaf Gardens. Burns also earned accolades while shooting major curling events around the world. Motor car sports was also a big part of his agenda, shooting the racing circuit when Mosport opened as well as Indy and Formula One racing. He is a member of Canada’s Curling Hall of Fame and the Etobicoke Sports Hall of Fame.

Mike Burns got the picture. That’s what every photo-editor at Toronto’s newspapers, plus magazines throughout North America knew. If he is was assignment at the track, the graphics are going to be first rate. In many instances photo-assignment editors by-passed their staff photographers in order to have Burns “shoot” a major event, safe in the knowledge that his expertise would provide the best “angle” to the story. Some of Burns’ best race track photos were snapped in the early morning, during training hours, when the varying degrees of sunshine danced off the rippling muscles of horses being exercised. His son and daughter, Michael Jr., and Patricia, are both award winning photographers at the race track. 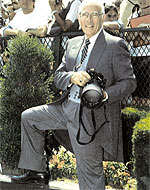