Few conditioners of thoroughbreds in Canada possess more impressive Hall of Fame credentials than those of Gil Rowntree. His accomplishments include a Sovereign Award as Canada’s Outstanding Trainer in 1975 along with four Queen’s Plate victories. He won with Royal Chocolate (1973), Amber Herod (1974) and Sound Reason (1977) for owner Jack Stafford and in 1984 he captured the 125th running of Canada’s glamor event with Key to the Moon for Bahnam Yousif’s BKY Stables. 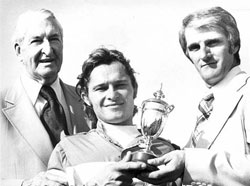 The greatest horse he ever trained was Overskate, who lost the 1978 Plate race by a short neck to Regal Embrace. Robin Platts was aboard Overskate that day and also rode Plate winners Amber Herod, Sound Reason and Key to the Moon for Rowntree. Overskate went on to a brilliant career, culminating with his induction into the Hall of Fame in 1993. He twice was named Horse of the Year and earned a record nine Sovereign Awards during an exceptional career, in which he won 18 stakes races in New York, Chicago, Ontario and Manitoba. “He was the best horse I ever trained. No doubt. The Plate? It was a combination of things that beat us. But on that day it was a great ride by Hawley; a mistake, or whatever you want to call it, by Platts; and racing luck. The best horse doesn’t always have to win. That was the only time Regal Embrace ever beat him. The Plate is one race, one day. It’s like the Kentucky Derby. Native Dancer lost one race, the Derby.” 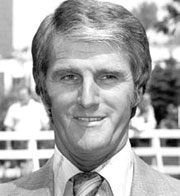 Rowntree also developed Canadian champions Ten Gold Pots, Deceit Dancer, Allan Blue, Key to the Moon and Sound Reason. One of his best fillies was Tudor Queen, a stakes winner in the U.S., and the colt Ambassador B. In 1973 he achieved an unparalleled feat when his Stafford Farms’ entry of Tara Road, Good Port and Royal Chocolate swept the board in finishing one-two-three in the Prince of Wales Stakes at Fort Erie, the second jewel in Canada’s Triple Crown. Born in 1934, the native of Toronto had a brief career as a jockey, working for trainer Art Halliwell, initially as a hot walker and groom. When he became too big for the saddle he became a jockey’s valet. He honed his training skills while working as an assistant to future Hall of Fame trainer Lou Cavalaris Jr., and went to work for Stafford Farms in 1967. Prior to the 2008 season he had saddled almost 700 winners.