The Lachance name is a familiar one to followers of harness racing, not only in North America, but around the world largely due to the enormous popularity of driver Mike Lachance. But before his emergence, older brother Gilles Lachance distinguished himself as one of the best horsemen ever produced in Canada, and Mike will tell you that his older brother was a big reason he came so far in the sport.

In 1964, at the age of 26, Gilles was Canada’s leading dash winner with 118 victories and only future Hall of Fame inductee Keith Waples won more purse money that season, by a margin of less than $4,000. The following year the native of St. Augustin, Que., eclipsed his effort by winning 206 races, marking the first time that a driver from Quebec had won more than 200 races in a single season. For many years afterwards Lachance regularly contested the national dash winning title and while records prior to 1965 are not complete, he still showed nearly 3,000 victories with purse winnings of $8.7 million in the late 1990s.A familiar figure in the United States, Lachance was sought out by the leading stables for driving assignments behind horses like world champion filly Handle With Care, the classy Windshield Wiper and the gifted trotter Songcan.

Lachance never loved harness racing more than he did in 1994 when he drove in a race at France’s famed Vincennes racetrack in Paris. French horseman Jean Pierre Dubois, a friend for 25 years, invited the vacationing Quebecer to pilot one of his trotters. The race was a mile and a quarter with 18 horses. His friend told him to save the horse, Tigre du Buisson, for the last 400 metres. That’s what he did and the pair won. “The reality of what I’d done didn’t hit me until the race was over. Watching the replay, I couldn’t stop crying. I can’t remember ever just crying for joy like that. It was so emotional, winning there, in front of 40,000 people. I was the first Quebecer to win a race in France. That’s something nobody else will be able to say,” recalled Lachance. Avid followers of Lachance recall his accomplishments and acknowledge the high standard of quality and performance he exhibited throughout his career. 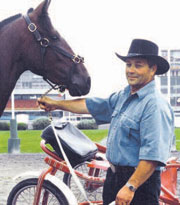