A magazine article about Grades Singing’s incredible career accurately described the great trotting mare as follows: “Once-in-a-lifetime racehorse with the heart to take on all comers, resolve to win under any conditions and speed to take your breath away.” She certainly one of the greatest trotters bred in Canada and was by Texas, out of the Duke Rodney mare Singing Bay, and was bred by Bay Jean Farm and Stable Ltd., of Les Cedres, Quebec. 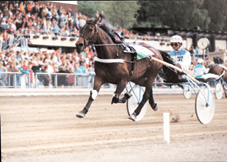 Grades Singing campaigned in almost every country in the world where trotters are raced and retired in 1991 with 87 wins and earnings of $2,190,872, a figure at that time exceeded only by Peace Corps as the richest trotting mare in history. Highlights of her career are considerable – three Breeders Crown championships, seven world records and numerous Canadian and USTA championship titles.

In 1984 at age two she was sold to Gratien Deschenes of St. Basile-le-Grand, Que. Grades Singing was an immediate success, winning 17 of 20 starts, some by as much as 34 lengths while campaigning almost exclusively in Quebec. She won eight Quebec Circuit Stakes and four Loto Perfecta Stakes. She finished the season with a mark of 2:02.2f and was voted the CTA “Two-Year-Old Trotting Filly” award. At three she reeled off 20 wins in 25 starts, the fastest in 1:58.2f, with New York Sires Stakes wins at Roosevelt, Yonkers, Saratoga, ten Quebec Circuit Stakes events and another CTA filly title. Her finest season came in 1986 when she went to the gate 41 times, finishing first or second on 34 occasions and earning $606,544. Her major wins that year were a Breeders Crown at Scioto Downs, the Maple Leaf Trot, the American Trotting Championship and World Cup, a race in which she set a world record of 1:57 for the fastest mile ever by a trotting mare on a five-eighths mile track. She also set a world record at Yonkers of 1:57.4 on a half-mile track. Possibly her greatest feat that year was a win at Yonkers in which all the other starters were pacers. She was the leading money-winning trotter that year and was acclaimed Horse of the Year by the CTA and Aged Trotting Mare by the USTA.

In 1987 Grades Singing was sold to Swedish interests for a figure in excess of $1 million. In four starts in the U.S., she won the Breeders Crown at Northfield Park. In Europe, she won the Elitlopp in Sweden, Premio Gaetano Turilli and Prize of Nations in Italy, Vermo Cup and Finlandia in Finland and the Prijs de Giganten in Holland. In the Vermo Cup, she set a world record of 1:56.1 for trotting mares on a 5/8ths-mile track. She was again voted by the CTA as the “Aged Trotting Mare” of the year. Her European campaign in 1988 included a win in the Gran Premio della Lotteria in Italy. She returned to Canada in 1989 and won another Breeders Crown, this time at Blue Bonnets. During a career that spanned seven years, Grades Singing made 148 starts in nine countries. 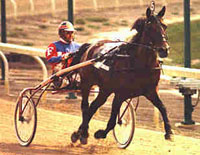