Perhaps the most appropriate description of Allan Walker would be to say that he was “a horseman’s horseman”. Although he did not obtain his license to drive harness horses until the age of 36, and died at an early age of 58, Allan Walker is recognized as one of the great Canadian horsemen. 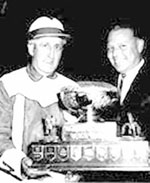 Renowned for his ability with trotters, Walker’s name is associated with a number of notable performers, particularly during the 1960s, with MacDuffs Lassie, Clement Hanover, Cadenza and Invasion. In 1967 he enjoyed his finest moment when he guided Garma Alert to victory in the Walnut Hall Stakes in Lexington, Kentucky, where the filly established a four-heat world record.

Based near Owen Sound, Ontario, Walker was among the leading horsemen on The Ontario Jockey Club circuit. He captured several driving titles at both Greenwood Raceway and Garden City, including 1963 when he achieved an impressive UDRS of .490. He also earned the distinction of driving the winner (Nancy Patch) in the final race at Dufferin Park before the track closed in 1955. In addition to his on-track activities, Allan Walker took an active role off the track, serving as one of the first directors of the Ontario Harness Horse Association. His legacy to racing lived on through his children Bob, Jean, Larry and Paul, who continue to be successful participants in harness racing.