Charles Taylor’s lifetime contributions, vast knowledge and extensive involvement in the thoroughbred horse racing and breeding industry, both in Canada and North America, earned his unanimous election into the Hall of Fame. The 62-year old author, journalist and horseman served the racing industry as Chairman and Chief Steward of the Jockey Club of Canada, Trustee of the Ontario Jockey Club, Provincial and National Director of the Canadian Thoroughbred Owners and Breeders Association as well as a member of the Royal Hong Kong Jockey Club, The Jockey Club (New York) and Director of the Keeneland Association.

Charles Plunket Bourchier Taylor was a founding director and Vice-President of Breeders’ Cup Ltd., and his constant efforts to promote racing in Canada were instrumental in the OJC’s successful bid to host the 1996 Breeders’ Cup at Woodbine. George Hendrie, chairman of the Board of Directors, said at the time of Taylor’s death that, “Without his tenacity, the Breeders’ Cup surely would not have come to Woodbine.”

Taylor assumed presidency of Windfields Farm in 1983, succeeding his father, E.P. Taylor. “His father was a builder,” said Bob Anderson, one of Charles’ oldest and closest friends. “Charles was a preserver. He cared more for the health and welfare of the Canadian breeding industry than anyone I know of.” Among the horses Taylor campaigned in his silks was South Ocean, winner of the Canadian Oaks in 1970 and dam of four stakes winners, including Storm Bird, champion two-year-old of England and Ireland and one of the world’s greatest stallions, and Canadian Oaks’ winner Northernette.

Prior to his interest in the racing industry, Taylor worked in 50 countries as a journalist, covering the Vietnam, Nigerian and Arab-Israeli wars; was The Globe and Mail bureau chief in Peking, Hong Kong and London; was Past Chairman of The Writers’ Union of Canada and author of five books and several plays.

Taylor, who died July 8, 1997, was survived by his wife, Noreen and children, Edward and Nadina, and his sister, Judith Mappin. 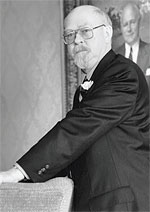