The first family to dominate the Queen’s Plate, as well as racing and breeding in Ontario, was that of the White brothers, John and James of Halton County, and John’s son-in-law, David W. Campbell. Described as “the real pioneers” of breeding in the province, they owned, bred and/or trained 12 Queen’s Plate winners, including Don Juan, winner of the inaugural running of the Plate in 1860. For the next 25 years the Whites influenced the growth of racing in Ontario. Their flaming scarlet silks appeared for the last time in the Plate’s winners circle in 1886. White’s Plate winners were raised on the family’s 320-acre spread on Bronte Side Road.

The name of Irish-born John White was probably more widely known than that of any prominent person of his time. John was born in Omagh, County Tyrone in 1811, settling first in Etobicoke and later in Halton. A lumberman who was recognized as a fearless and fluent speaker, White was the first reeve of Milton. He and James were the first to import purebred Shorthorn cattle from Scotland to improve the basic livestock industry in Halton and were one of the early apple orchard producers in the area. The Whites also owned seven farms in the county and had sawmills throughout Ontario and Michigan. He was also the first president of the Halton Agricultural Society. But it was White’s love for politics and horses that forever distinguished him. First elected in 1851, he sat as a Liberal member for Halton for six terms, and was an outspoken antagonist against “The Family Compact” and a loyal supporter of William Lyon Mackenzie. White was responsible for introducing a bill in the fourth Parliament of Upper Canada in 1853 that made Milton the county seat instead of Oakville when Halton separated from Wentworth County. His last year in Parliament was 1872.

White, who died in May, 1897, owned the first privately owned racetrack in Canada at Woodlands. It was thoroughly equipped with stables and jockeys’ quarters and was located back of the breeding and foaling barns where the Whites housed a string of thoroughbreds they had imported from Tennessee. Terror, which the Whites bred and owned, dominated the breeding sheds, siring four Queen’s Plate winners – Vice Chancellor, Fanny Wiser, Williams and Victorious. Two of Terror’s daughters also produced Plate winners. Yellow Rose, the aging Viriginia-bred mare was most responsible for White’s dominance. She was the dam of the first Plate winner, Don Juan, and Wild Rose in 1867. One of her daughters, Liberty, produced Plate winners Touchstone and Palermo.

Between 1860 and 1886, Yellow Rose appeared in the pedigree of eight Plate winners, a feat no mare has come close to equaling since. 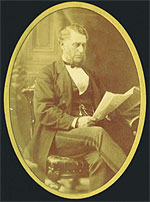