Few horses in recent years have captured the attention of racing fans more than the trotter with the mixed-noun name, Billyjojimbob. It’s a fairy tale story, the gelding who won O’Brien Awards as Canada’s best Aged Trotting Horse in 1991 and 1992 and voted the USTA’s Trotter of the Year in 1991 by virtue of his win in the Provenzano Memorial Trot at Batavia Downs, N.Y., and Breeders Crown triumph at The Meadows, Pa. The following year he became the first Canadian-bred to capture the Elitlopp in Sweden in world record time against Europe’s leading trotters.

Trained by Mike Wade and owned by his wife Lori of Little Britain, Ont., the gelded son of Balanced Image was raised at Mike’s father’s farm at nearby Seagrave. He was driven for most of his career by Murray Brethour. It was Lori, who had looked after Ginger Jewel, the mare, and spent a great deal of time with the colt, who dubbed it Billyjojimbob. The name comes from the TV series, The Waltons, which featured a regular closing sequence where each child in the household was wished good night. Lori found this amusing and decided to call him Billyjojimbob as a play on words of the familiar sign-off. However, he soon became affectionately known as BJ. Fourth in his only start at age two, Wade stopped on him, feeling that he needed time to develop. However, he barely survived his 3-year-old season when he became deathly ill with some sort of poisoning and was rushed to Guelph diagnosis and treatment. Later that season BJ was back, serving notice of future greatness when he won Mohawk’s General Brock Series and OSS events at Windsor, Elmira and Dresden.

Billyjojimbob was at his best the following winter in the Horsemen’s Trotting Series at Greenwood and dominating the free-for-all ranks. He climaxed the season by winning the Provenzano Memorial Trot in world record time and the Breeders Crown in track record time. He highlighted a successful 1992 campaign with a world record performance for two heats (1:55.1 and 1:55.3) in the Elitlopp in Stockholm. Earlier that year he won The Meadowlands Su Mac Lad Series before heading to Sweden, with his fans following. No one who was there or who later watched the tape of that race can ever forget the track announcer switching from his native language to urge the gelding on in the final heat with an unforgettable cry of “Go Canada Go.”

Later that year, after defeating the top trotters in the OJC’s free-for-all ranks, he suffered an adverse reaction to an immune system building medication, which compromised his breathing capacity and forced his untimely retirement. He retired with a record of 39 wins, six seconds and four thirds in 62 starts, and earnings of $945,741. In 2000 Mike Wade brought the retiree to Mohawk to pose for pictures with race fans who had lined up all evening for a chance to see one of their heroes in person. In 2002 he died in his paddock at Wade’s Little Britain farm at age 15 of a suspected heart attack. 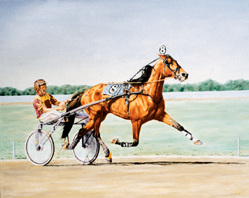