Lou Cavalaris Jr., known affectionately as “Large Lou”, was for three decades one of the leading trainers in North America. He topped the list for the most wins in 1966 with 175 victories. He was also third leading trainer in races won in North America in 1967 and 1968. In that three-year span he saddled 490 winners. In Canada , the horses he trained for Gardiner Farms, Allen Case, Windfields Farm, John Smallman, Peter Fuller and Larkin Maloney’s daughters, Mrs. W.J. Seitz and Mrs. V.P. Reid, helped him earn eight money-winning titles. He also had the most wins six times. 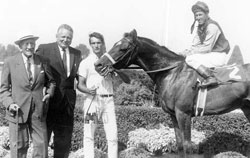 If talented horses define a trainer’s career, then the names of Dancer’s Image, Cool Reception, Victorian Era, War Eagle, Carney’s Point, Mary of Scotland, Two Violins, Arctic Blizzard and Ice Water, were the ones who created the highs and lows of the career of this amiable, industrious and passionate individual.

No horse had ever been disqualified in the 94-year-history of the Kentucky Derby. But in 1968, two days after Peter Fuller’s Dancer’s Image had won the Derby, the Kentucky Racing Commission nullified the win, allegedly because traces of the pain-killer “bute” were found in a urine sample. Both Fuller and Cavalaris felt it was a “political decision” that cost them the victory. A year earlier Cavalaris had Canada’s champion 2-year-old of 1966, Cool Reception, running against the best three-year-olds in America -Derby winner Proud Clarion and Preakness winner Damascus – in the 1967 Belmont Stakes in New York. In the final furlong Cool Reception suffered a broken cannon bone and gamely held on to finish second. After what appeared to be a successful surgery to mend the fracture, Cool Reception thrashed about and shattered the bone again. “I broke down and wept like a baby,” admitted Cavalaris when he learned that Cool Reception had to be put down. Arctic Blizzard was pounds the best in 1968 and favored for the Plate but again Lou’s hopes went “poof” when the colts mashed a sesamoid and was forced into early retirement.

Next to Cool Reception and Dancer’s Image, one of the best horses he ever trained was Victorian Era, who earned Horse of the Year honors in 1966. Lou, who never did win the Plate during his lengthy and illustrious career, had the horse he felt could win it in 1965. However, owner Allen Case failed to make an eligibility payment for Victorian Era and the colt was ineligible. The Plate “kiss of death” struck again in 1970 when Gardiner Farm’s undefeated Two Violins came up lame two days before the race. 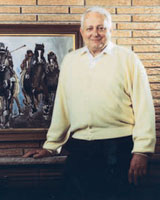 Fate and racing luck, however, intertwined Cavalaris’ career ever since the former short-order cook and World War II U.S. Merchant Marine from Hamilton, Ohio, emigrated to Canada. His racetrack training began in 1946 in Detroit, where he “walked hots” and mucked out stalls, later taking out his trainer’s license to look after his father’s horses. By 1947 he was in Toronto and saddled his first winner at Dufferin in 1949 with a $2,000 claimer named Perfect Melody. In 1953 Cavalaris tried the restaurant business and “fooled around with horses in the winter.”Then, in 1957, owner Peter Del Greco offered him a job training his horses. He had a lot of luck with Del Greco, especially with a horse they claimed in Florida for $11,000. The horse, the gritty handicapper War Eagle, was a consistent stakes winner, earning over $100,000. 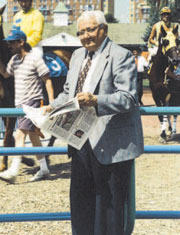 In 1978, Lou traded in his work boots for an office desk. He became the highly respected racing secretary for the then Ontario Jockey Club. After 10 years in that demanding role, Lou couldn’t resist the urge to train horses again. He returned to the shedrow. One of his clients was George Gardiner. The respect he earned from the racing community was evident when Cavalaris was asked to serve on the Selection Committee of the Breeders’ Cup and also was an integral part of the Ontario Racing Commission’s Appeals Board. He retired as an active trainer in 1995 and was inducted into the Etobicoke Sports Hall of Fame in 2006. 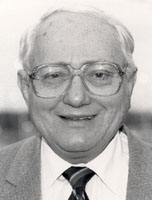