When David Gall climbed off his 7,394th winning mount in September, 1999, it marked the end of a career, largely unheralded except for a couple of occasions, but one that placed him among the elite of his profession. Only three Hall of Fame greats – Bill Shoemaker, Laffit Pincay and Pat Day had won more races than the 57-year-old farmer’s son from Rose Valley, Sask. Performing at Fairmount Park in Southern Illinois near St. Louis, Gall had 10 mounts in the 11-racecard on his final night, which brought his number of mounts to an astounding 41,709 in a 43-year career. His mounts earned $25 million, a figure well below the earnings of many jockeys with fewer victories to their name – a clear indication of the lesser company in which Gall plied his trade.

Twice, however, he was leading rider in North America in terms of number of victories – 479 in 1979 and 376 in 1981. Despite his amazing record, Gall was not a household name in his native land or anywhere, really, outside Collinsville and the 190 acres of Fairmount. He was king of the $3,000 claimers, baron of the B-circuit.

Gall began his career in Canada on the Prairie circuit – Regina, Saskatoon, Calgary, Winnipeg, Edmonton, and later Vancouver and down to Bay Meadows and Tanforan in Northern California and Arizona before making his home at Fairmount, where he became a legend. He once won eight races on a 10-race card at Cahokia Downs in south Illinois, a record he shares with six other riders, and several times won seven races on a program. “Anyone can get lucky now and then and win a bunch of races on a single racing card, but to me, it’s consistency that counts. That’s why I am proudest of my national championships,” said Gall when he was inducted into Canada’s Hall of Fame.

Lack of recognition by the main-core press never bothered Gall, who began riding at age 15 in Edmonton. He recognized his limitations early in his career. He never rode in a Breeders’ Cup or a Triple Crown race; never sought to move up to big-league tracks with their pressures, politicking and cliques. He didn’t like glad-handing and schmoozing for mounts. “In my mid 30s I realized I wasn’t going to make it big. I never joined the rat race because I don’t like rat races. I love horse races”.

In his last career race he won on a mount called Sturley. But the name of the horse he piloted to a show place finish in the 10th race that night summed up better the way he felt at the end of his career. It was called Truly Happy. 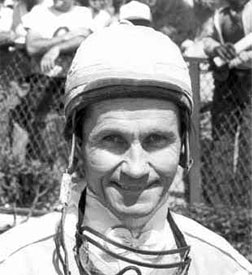